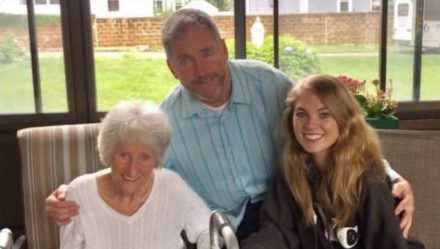 This picture shows what my normal life was like two years ago, like most Americans. This is also what life is like today in more and more countries that take this virus seriously and have crushed the virus down to the point where it only exists in tiny numbers within their populations.

This nation needs to stop messing around and get serious about crushing this virus. We need to do this by shutting down nationally and simultaneously for a few weeks. It is the only way to end this rapidly.

Some of us don’t have years to wait.

Shut it down for a few weeks to open up the economy, and stop community spread like New York did.

Real visits with our own parents depend on it. This matters.

Otherwise we will live like this for months and even years. The resentment against the dithering fool in the White House is going to mount, for stealing the small daily bonds of family and friends, for stealing our very lives themselves through his inaction, and for continuing to plant his crazy delusions into the minds of his followers.

A science-based administration in this nation led by Joe Biden, who followed scientific advice in the fight against Ebola, not only provided all resources recommended by scientists, but also never used the epidemic to exploit political divisions.

Kamala Harris grew up with a respect for science in her own household, as her mother was a research scientist.

This nation will rise again next year, and it will do it with a renewed respect for education, expertise, and science.

The Latin word “scientia” means nothing more than “knowledge”.

Just give us tried and tested knowledge. That is the way out of our current American madness.