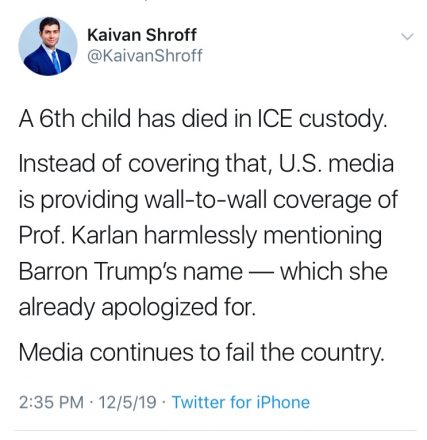 It is absurd that Ms. Karlan felt compelled to apologize for anything. The four-judge panel truly was a show-trial, and a waste of time. There was no new evidence and the exercise did not sway anybody.

CNN had a very misleading headline the other week “Bolsinaro calls DiCaprio out about setting Amazon Fires”. The article was fine and described how the president of Brazil was deflecting blame and misleading the public, but how about “Bolsinaro Lies about Destroying Rainforest”.

The media has always had a centrist bias of sorts, but something shifted in journalism schools where “report the facts without bias” became “report both sides” which is an entirely different thing. Especially when one side lies as a matter of policy.

In order to report the facts without bias, a news organization has to have the ability to separate fact from fiction. That means reporters and editors who either have subject-matter expertise or have the ability and funding to get it from those who do.

Today’s mainstream media outlets have limited or no ability to comprehend many of the stories they report. For each high-profile talking head on CNN or MSNBC (Fox doesn’t even try), there are hundreds or thousands of junior reporters and stringers who know absolutely nothing about anything beyond where to stand while the lights are on and how to read a script into a mic.

It is MUCH easier and cheaper to report both sides than to make even a token effort to report the facts. The “fact checker” approach is a begrudging acknowledgement that more needs to be said, but misses the point.

Have you noticed how the media is chock full of phrases like “Ukrainian corruption”? It isn’t possible for MSNBC or CNN to report anything about the impeachment inquiry without repeated mention of “the investigation into Joe Biden”. Rachel Maddow correctly predicted this months ago, during the summer (I think). This is how Donald Trump manipulates the media.

Remember when “fake news” meant something? The Russians intentionally planted and distributed lies about Hillary Clinton in order to manipulate public opinion during the 2016 campaign. That is what “fake news” actually is. Donald Trump and the GOP have been shouting “fake news” about every story they don’t like ever since. The result is that nobody can talk about the original issue any more.

We have to figure out how to address this.

No amount of “fact checking” or assertions that the allegations are baseless change the reality of the impact. The Trump administration is causing hundreds of millions of Americans to associate Joe Biden and Ukraine with corruption.

The bad guys are winning this war.

Um, the whole premise of the impeachment inquiry IS an inappropriate request for an investigation into Joe Biden and his son. Not sure why you object to that being mentioned.

It isn’t that I object to it It is instead that the very act of attempting to impeach Mr. Trump reinforces the propaganda that Mr. Biden is corrupt.

As the Unsinkable Molly Brown famously said: “As long as they’re talking about me, I don’t care what they say”.

If the GOP has its current majority in the Senate when the impeachment vote happens, and if that majority maintains its treasonous loyalty to itself and Mr. Putin, the result will be that impeachment itself will be yesterday’s news by November of 2020 and the meme of the “corrupt” Democrats will be firmly established in the US electorate.

By mid-November of 2020, US support for the Ukraine will end. The Russians will complete their takeover shortly after that, if not sooner.

We MUST find a way to either address this reality, or admit that the constitutional powers of the US were unable to contain this Russian invasion.

@why do you assume:
The voting public doesn’t care about facts. If they did, support for the GOP would be in the single digits.

Television advertisers have known for a very long time that brand awareness is cemented by a negative impression just as strongly as a positive one. “Charmin” is a case-study in the use of this — “Mr. Charmin” (“Please don’t squeeze the Charmin”) was despised by nearly the entire audience when those commercials were first run. The character was designed to have the effect. The reality is that consumers remembered the “Charmin” brand long after they forget why they remembered (because they hated the commercial).

I’m surprised that you don’t recognize this — it’s exactly the same way that many of the players made “Hilary Clinton” a synonym for “corrupt” in spite of absolutely zero evidence to support the allegation and mountains of evidence against it.

Voters remembered the “Clinton Foundation” and forgot the “Trump Foundation”, even though the former was legitimate and never had any significant legal difficulties, while the latter was fraudulent and ultimately ordered dissolved by the State of NY.

When will Democrats learn that it’s always better to fight back? Bill went on 60 Minutes with Hillary and saved himself from Jennifer Flowers. He fought every single investigation tooth and nail. Obama did a fantastic job destroying the Jeremiah Wright controversy before it consumed his campaign. Dukakis failed to fight back, Kerry let the Swift boats define him, and Hillary let the emails define her. This was after she did a stupendous job fighting back against the Benghazi BS and they had nothing to attack her on.

So Biden, who I will concede is likely to be the nominee, needs to come up with a better strategy than belittling the questioner. The fat old man deserved it, but the next one won’t go down so easily. They need to do better.

I do agree with Christopher if the House votes to impeach that will have the effect of putting impeachment on the ballot in 2020 and keeping it in the headlines. The more the next election is about Trumps corruption and unfitness for office, the better in my view.

OK, but again since we’re talking non-stop about Trump and impeachment, why won’t THAT correlation remain in the voters’ minds for all the same reasons? My bigger fear is that the Dems are simultaneously passing all this great legislation through the House, but nobody’s going to know.

I think we need to find a way to continue talking non-stop about Donald Trump and impeachment, while not talking about “Biden” or “Ukraine”. It doesn’t much matter what that way is.

When the dairy industry was fighting tooth-and-nail against the new-fangled “margarine” in the 1950s, they arranged for Congress to pass laws making it illegal for margarine producers to use the word “butter” in their advertising.

The result, for those of us old enough to remember, is that margarine was always compared to “the 79-cent spread”.

I suggest we find a similar way to have the media talk about Donald Trump and the abuses of his administration.

The only names that the media should be relentlessly repeating are “Donald Trump”, “Mike Pence”, “Mike Pompeo”, “William Barr” and perhaps “Rudy Giuliani”. Those names should be repeated in the context of “treason”, “bribery”, or “high crimes and misdemeanors”.

I really don’t mean to sound obtuse, but I still can’t fathom how we talk about impeachment without talking about what he’s being impeached for – extorting an ally to investigate the Bidens in exchange for releasing duly appropriated aid. Of course we COULD be impeaching him for other things too, but there seems to be little appetite for that.

The point here is that these are now the only two articles.

The House will pass this resolution. The Senate will summarily reject it. The GOP message between now and November 2020 will be:

The Russian takeover of the US government will be complete.

You seem to be living in a world where Fox News is the only allowed source of information. I agree both impeachment and nonremoval are probably foreordained. You probably have the GOP messaging about right, but you make it sound like Dems will just concede the election to Trump. Don’t you think Dems are if anything more motivated than they ever have been to beat somebody? The polls do not bear out your gloom and doom about the outcome.

Fox News is the dominant information provider for pretty much the entire red-state region.

The only thing I see Democrats doing with this motivation is cluck-clucking on MSNBC and telling TV microphones how terrible the GOP is.

Why hasn’t Congress invoked its own contempt powers? Why are witnesses, including sitting cabinet officials, treating a congressional subpoena like an invite to unpopular party?

We Democrats are still stumbling around the garden trying to avoid spilling our wine while the GOP assassins are shooting everyone in sight.

I think Donald Trump and GOP are better at working the media than we are. That’s why I think it looks grim for 2020.

There is a great documentary on “media mediocrity”. Check out the trailer: https://www.youtube.com/watch?v=uGpdxwn_pdg&feature=emb_logo

35 thousand vehicles per day cross the bridge above where this material is being stirred up. https://twitter.com/grumpygrumpyowl/status/1221927594775523328

Have you ever woken up one morning and wondered: how do I clean up pesky arsenic-laden coal ash with a side of asbestos?