With apologies to Peter, here’s a really fun story from the UMass Dartmouth debate, published in today’s Globe.

Healey tells Mihos at debate: ‘Keep your hands to yourself’

The campaign is almost over, and in some ways little has changed. Kerry Healey is still annoyed at Christy Mihos. Deval Patrick is still trying to play the peacemaker. And Mihos just doesn’t quit.

At one point during a debate last week in Dartmouth, Healey mentioned that she had gone cranberry-picking in bogs along the South Coast.

“When I go out into the cranberry bogs, as I recently did, I think, ‘What a beautiful resource we have here from Massachusetts,’ ” Healey said.

“I’d love to see you out there harvesting cranberries, you know that,” Mihos said. “That is a vision. That is a wonderful vision.”

“I was there,” Healey replied.

Mihos then patted her on the back, prompting Healey to say: “Keep your hands to yourself.”

Minutes later, Patrick surveyed his opponents and said, “Despite the wisecracks and the sanctimony, and the distortions, I’m going to miss you all.”

“So where you going?” asked Mihos.

“All the way to Beacon Hill, my friend,” Patrick said. 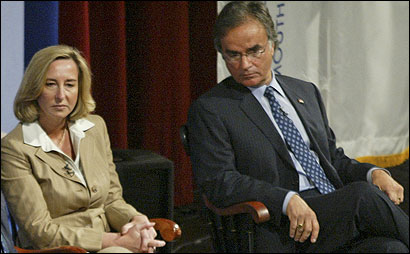 It's hilarious watching #mapoli #MAGA Trumpies that support @JimLyonsMA calling Trump lover @CarnevaleMHD a "DC swamp creature" as the fate of the beleaguered @massgop Chairman Lyons is about to be decided Tuesday night.

We are thrilled to have our presence in the North Shore restored! Sharing Dominick’s excitement for what’s in store. #mapoli #northshore

Many thanks to the North Shore @MAYoungDems chapter for the engaging discussions at your meeting yesterday! As Vice Chair of the @salemdemcc I’m grateful for the work the Young Democrats do to help elect candidates who share our values, here in #SalemMA and across #mapoli.