How did Americans become some groveling servants? Even the apparently blustering, gun-in-pocket wingers bend over for the swift kicks from the TSA and other hectoring oppressors. 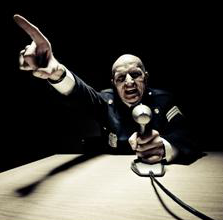 Only the latest catalyst for that question was the ignorant and authoritarian rousting and persecution of plain folk on child-porn downloading snafus. The double bladed ax on this latest included:
So much is wrong with that, so much is un-American/anti-freedom, but it’s easy to parse.
We have seen this from when Dwight Eisenhower was President, and really back to FDR if you include our concentration camps for U.S. citizens in WWII. From Red Scare to Yellow Peril through Cold War…into 9/11 and now to the Department of Homeland Security and Transportation Security Administration we have increasingly become a nation of capons or sheep. We do as we are told and think ill of those who dare to question or refuse.
While the WWII generation (my parents’ era) was redefining necessary deference to authority, we boomers grew up in their counterbalancing fantasy. We watched Westerns, war movies, and TV full of pioneers, frontier heroes, and all manner of those who fought and died for American freedom.
Meanwhile adult America gave it up at work, grateful for permanent employment and pensions and economic subsidies for housing, education and such that they were convinced they’d earned forever for freeing the world of Hitler, Hirohito and Mussolini. (So long as you were white), we’d have a never-ending growth spiral of prosperity and security. That of course required keeping out or crushing spies, communists, anarchists, racial-equality agitators and such.

We have only escalated that craziness and hypocrisy. I long ago came to the stunning (for me at least) conclusion that not only was the WWII generation’s bluster about freedom just that, but the current Tea Party and Second-Amendment shouters about liberty are also bleating sheep when it comes to personal freedom and integrity.
Given the slightest tinge of perception of perceived danger, they baa and maa, “Better safe than sorry! Better safe than sorry!”
I try in vain to imagine the heroes of the movies and novels and history books of my youth doing that. Break down the door, throw them to the ground, point assault weapons to their temples, confiscate their property, and assert they are guilty of sexual felonies…against children. Frisk them, parade them through denuding scanners, or pluck random seniors, children and adults for interrogation by non-police acting like special forces.
In print and online, one citizen or even commentator after another bleats “Better safe than sorry!”
The Administrations of George the Lesser and now Obama fall back to the disingenuous. They would have citizens disprove negatives to have their rights we allegedly have long earned as a nation. They ask the unprovable. How do you know Homeland Security has not stopped 1 or 14 or 1,014 bomb plots? Can you prove that the often capricious and sometimes despotic TSA procedures and individual abuses have not prevented comparable numbers of airline highjackings or explosions? Are you willing to take the chance that if we let down our guard for an instant terrors will immediately follow?
The real questions are in many ways more demanding and scarier:
Those are much harder than genuflecting and accepting the intrusions, blunders and abuses too many Americans do now. We can bleat, move to another patch of grass and feel gratitude in the delusion that what we have given up — our essence as Americans — is safe only when we are obedient. How very Orwellian!
We have not and do not have a President or Congress dealing with the underlying issues and solutions. Every so often someone notes that Israeli security does the right things at airports, mingling with travelers and having highly trained agents actually thinking.
In contrast, our own airport-security sorts check their brains at the automatic doors. In fact, they likely have been that way from childhood or birth. A recurrent theme at Marry in Massachusetts and Harrumph is there is an innate difference between the literal, rules-are-rules types and people who think. Like so many jack-in-a-box toys, they pop up to repeat that they are only following the rules, regardless of inanity, inefficiency and even destructiveness that may ensue from doing so.
Within the past decade, we have experienced the extreme of this bifurcation. The better-safe-than-sorry types seem absolutely proud of their submission. Ceding the rights that have long distinguished Americans apparently is not a concern. So long as they can pretend that giving up their liberties makes them secure, they eagerly do it.
Such a deferential attitude should really have gone out with George II and George III, along with the Tories here. Our ancestors did put their collective necks and all they possessed on the block to change their status from subjects to their own selves.
Alas, our current large flock of sheep don’t seem interested in real solutions. Nor are they willing to turn the tables on the authoritarians, demanding that they justify their abuses and negation of citizen’s liberties and rights.
As so often in recent history — think Vietnam War, Civil Rights movement, marriage equality — this falls to the progressives, with support from libertarians and such. The sheep and literal thinkers won’t define the problems nor attempt to solve them. It is ever so much easier to get along and go along.
Cross-post: This rant appeared at Marry in Massachusetts while I awaited the new, improved BMG.
Please share widely!

Love seeing the #PowerOfCulture so embraced on the Cape! Congratulations to Harwich on their 2 new #CulturalDistricts! #mapoli

Today, the @MA_Senate adjourned in memory of Mary Margaret Moore of #SalemMA. A long-time advocate, Mary Margaret fought for civil & disability rights for all & was a staunch champion of independent living. She will be dearly missed. #NorthShoreMA #MAPoli

Healey has said her transportation plan will focus on safety and reliability. Her administration is working to find a new general manager for the @MBTA and a transportation safety chief. #WCVB

The ELM Action Fund is getting ready for the 2023 elections cycle! Did you know we endorse #EnviroChamps in local races?

We invite candidates running for municipal office across Massachusetts to complete our questionnaire: http://bit.ly/40rZMoI

Gov. @maura_healey and Lt. Gov. @KimDriscollMA on the MBTA #mapoli

Y'all are shocked that @maura_healey is nothing but show with no substance?

Her entire time as MA AG... weak af cases against Trump and letting big pharma off the hook. SHE LED THE CHARGE ON THE SECOND THING. #MApoli #BOSpoli