Maybe the world, or at least Boston’s City Hall, is mellowing. Our extremely popular, longest-serving-ever Mayor Tom Menino seems less prickly in recent years, even laughing at criticism…sometimes. City Council President Steve Murphy is lately even more amiable than usual, certainly due to his very recent engagement. (His re-elections to Council and gavel wielder can’t hurt.)

Now though, I’ll watch for steam and fire down on the Brutalist plaza.

Just Tuesday, the previously unthinkable happened — three Councilors skipped the Mayor’s state-of-the-city address. They were taking a wee vacation at Murphy’s Ft. Lauderdale condo. They had fair reasons/excuses, including that they had booked and paid for their trip when the speech was on the calendar for the previous week. Menino rejiggered it to avoid conflict with the NH POTUS primary. 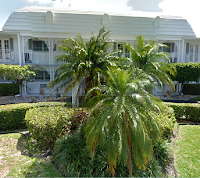 Pic Note: That condo adapted from Google Maps with the overhead line brushed out.

The truth is in the old days no one would have dared that. Instead this time, the stage had 10 instead of 13 attendant chairs.

As a king watcher, I can’t stop considering what the 2013 mayoral campaign will include. As well as being personally charming, Menino is politically canny, very canny. If he intends to run again, he won’t tip his hand early. He’ll let others fester and even show their cards.

Already, two long-distance runners have started, one actively racing and one seeming still stretching. TOUCH radio founder/personality Charles Clemons has not responded to my emails or requests to come on Left Ahead. However, after I asked a couple of times, he did change his Facebook page to feature a profile pic of his campaign poster.

It seems that Brother Charles as he likes folk to call him is in, kind of, and folk say that he sometimes hands out flyers reading that he’s running. There’s no platform or website or such brain-straining, time-consuming details, but we likely will hear from him sometime this year.

More definitively, Will Dorcena is all in and talking about it. I’m so intrigued at this that I did a three-parter on his announcement and platform. It starts here with links to the other posts.

Back to Murphy, he claims to be happy as President. Yet several Councilors have told me repeatedly over years that any of their body who says he or she is not interested in being Mayor is lying. I’ll wait until Murphy says he’s running to count him in the hunt.

I would love to see a real race. A caveat is that as much as the provincials in places like South Carolina and Boston love to brag about their political campaigns being blood sports and muddy as hell, I can do without the petty and personal we saw when Maura Hennigan ran against Menino in 2005.

However, we have big local issues like schools, transit, crime and more. Dorcena already has a pretty beefy platform with fairly specific planks for most of those. Whether Menino runs for re-election or not, such problem/solution sets could really elevate the dialog. The minority of voters who pay attention could get a real fix on the candidates’ positions. Moreover, it would force Menino to sculpt and display his best takes on these issues — upping everyone’s game to the benefit of the town.

Understandably, the media focused on Menino’s pledge, with timeline, to neighborhood schools. “I’m committing tonight,” he said, “that one year from now Boston will have adopted a radically different student assignment plan  — one that puts a priority on children attending schools closer to their homes. I am directing Superintendent Johnson to appoint a citywide group of dedicated individuals. They will help design the plan to get us there and engage the community in this transition.”

Moreover, he also announced “a plan to transform Madison Park (Technical Vocational High School) into a top notch center for career development.” Right now, only 11 students were in cooperative word programs. “We can then change the schedule and the curriculum so they allow for real work-based experiences. Second, we will create the Madison Park Business Partnership. I challenge Boston’s businesses and institutions to provide advice, jobs, and their own financial resources to help transform this school.” He announced two business partners to start.

By the bye, such efforts are among those Dorcena included in his platform. That could be like-minded coincidence or a reaction. Regardless, it’s good for the city.

Additionally, he promised to expand neighborhood crime watches. He pledged 100 new ones in 2012.

For health, he had a spongier goal, but it also came with a 2012 target. That would be the residents, apparently including him, to lose 1 million pounds in the year. That would only be about five ounces per, averaged over those chubby and scrawny alike, so make that 10 ounces. No one could measure that, but we’re like to get the message in schools and otherwise.

Job creation was a weak point too. He made vague promises of new jobs as part of the casino proposal to East Boston. TBD and there’s a needy city on this side of the tunnel.

That casino thingummy brings up Murphy again. Dumcius analyzes his recent appearance on Chris Lovett’s show. On the one hand, Murphy seems to support Menino in restricting the vote to that ward on whether to allow a casino in East Boston. On the other, he implied that he can do better than the Mayor in dealing with the problem developer who left the huge Downtown Crossing hole where Filene’s use to sit.

He said Menino was “rebuffed” in effort to get development downtown. In contrast, Murphy seems to want to make the developer fix one to get the other, and maybe even to play eager casino hopefuls off each other.

To me, that sounds like a candidate, if cautious and biding his time.

POTUS and our Senate races will surely dominate the rest of this year politically. Yet, a thread of the 2013 Mayoral contest will surely be ever visible. That’s great stuff.

Cross-post: I realized after putting this on Marry in Massachusetts that it might fit on BMG too.

Thank you, @TommyVitolo, for your work this legislative session to protect our #Veterans and their families, as well as your support for those who currently wear the uniform. #mapoli

'He betrayed America': GOPer @SenMikeLee buried by @SteveSchmidtSES for obedience to Trump 'above all' https://www.rawstory.com/mike-lee-trump-2657859241/ @MittRomney #mapoli #utpol

Conservatives used to say they cared about 1⃣rule of law2⃣ institutions of democracy 3⃣and protecting our national security?

#TeamDempsey out in Weymouth today! Honored to have the support of these amazing Dem activists, including Rebecca and Kathy. #mapoli