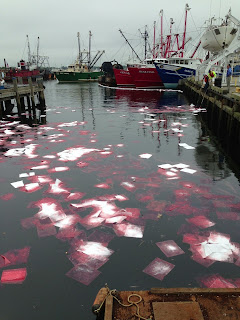 I’ve covered oil spills in the Gulf of Mexico and in Arkansas, but today the oil came to me.

Thursday morning a local journalist alerted me to reports of an oil spill right down the street from me in New Bedford Harbor. I headed down and found hundreds of gallons of diesel fuel (dyed red for tax purposes) coating the water off Pier 3. Some television crews were filming the spill, so I talked to WJAR and WLNE generally about the potential impacts of oil spills – concern for the people who make their living off the water, the fish who swim in it, and the seabirds who land in it.

As soon as I finished, a Coast Guard staffer angrily told me, “You shouldn’t be talking to the press. We should be presenting a united front.”

“I work for the National Wildlife Federation, not a federal agency,” I said. “I’d be happy to work together on this – just tell me what’s going on.”

She stared at me and said nothing.

“OK, well so much for a united front,” I shrugged. 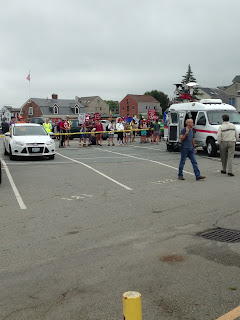 Coincidentally, the Energy Exodus march was passing through New Bedford at the exact same time as the oil spill. The climate activists are marching all the way from Somerset’s Brayton Point coal-fired power plant to Hyannis in support of Cape Wind.

In less of a coincidence, the moment the Coast Guard staffers saw the dozens of Energy Exodus folks arriving, they threw up yellow caution tape and ordered all civilians away from the oil spill. That was just as well for me – the diesel fumes were making me nauseous. When I got home, I found my clothes still smelled like a gas station.

As it turns out, this was the first of two oil spills in New Bedford Harbor on Thursday. I understand tracking down the culprits is hard, but do the local authorities have to sound so fatalistic already? Welp, lotsa boats, they all look alike, whaddya gonna do?

📛VERGE OF NUCLEAR WAR ON EARTH
WORLD HEALTH ORGANIZATION (WHO)
20 minutes ago
""Governments need to work fast,”
"medicines that should be stockpiled for radiological and nuclear emergencies'"
WHO :https://bit.ly/406QoH3
#mepolitics #worldnews #nhpolitcs #mapoli #uk #breaking

This is their ransom note: “If we can’t have a luxurious early retirement at the expense of others health and safety, we will raise the rent.” #mapoli #bospoli

When @MayorWu doesn’t want the public to know the police couldn’t lawfully stop us from protesting, so she ducked through her neighbors’ backyards to avoid us….then she started having us arrested. The 1st Amendment doesn’t exist in Wu’s Boston. #bospoli #mapoli #shameonwu #FYO

“Especially with a split Congress, states can’t wait for the feds to be their knight in shining armor,” @PBaxandall said. “They need to take action themselves.”

Read the full story on how states can advance tax equity via @publicintegrity: https://publicintegrity.org/inequality-poverty-opportunity/taxes/unequal-burden/how-will-a-divided-government-affect-taxes/ #mapoli

This Saturday at 11 a.m., come support rent control with us and our allies from across the city at the MA State House!