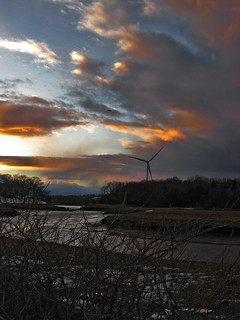 UPDATE 4/25: The New Bedford City Council briefly threatened to turn an easy touchdown into a fumble, but they managed to approve the contract.

As Ariel Wittenberg reports in the Standard-Times, the New Bedford City Council will soon consider a proposal to buy power from a planned wind farm in Plymouth after a subcommittee approved the plan that would save the city somewhere around 30 percent on energy costs:

The proposal, made by Mayor Jon Mitchell’s office, would enter the city into a power purchase agreement with Future Generation Wind LLC to buy wind-generated electricity at 10.8 cents per kilowatt hour for the next 20 years. […]

Scott Durkee, director of the city’s energy office, noted that the power purchase agreement will also save the city money. Currently, he said, the city’s lowest costing energy contracts are 11 to 13 cents per kilowatt hour, with the city paying closer to 15 to 17 cents per kilowatt hour on most contracts. Signing with Future Generation LLC is predicted to save New Bedford upwards of $20 million over the life of the contract.

Additionally, Future Generation LLC is offering to pay the city $250,000 in a sort of signing bonus meant to help further New Bedford’s efforts to become a premier port for offshore wind. Future Generation owner Keith Mann said he is also considering using New Bedford as the receiving port for his turbines.

It’s hard to overstate what a bargain this is – the best energy at the lowest price.

For some context, 28 states paid more than 10.8 cents is About per kilowatt hour for their electricity in February. And most of those states were sending the money out of state to buy coal and natural gas that polluted their air and added fuel to our climate crisis.

On top of all the benefits of cleaner air and climate protection, an extra million dollars a year is a huge deal in a city whose entire budget for FY2014 is $263 million. That’s an extra dozen or more police officers or teachers or city bus drivers. And on top of that, New Bedford businesses would get the boost from turbine construction.

Although not even prayers could save Walker's idiocy, he even realized, #USConstitution is the BEST thing @GOP & MAGA got going! #BOSpoli #MApoli

C'Mon! @realDonaldTrump doesn’t realize w/o US Constitution— SCOTUS, minority rule (via electoral college), and all of the other stuff used to oppress POC also goes away. US Constitution is best thing MAGA has going. Talk about looking a gift horse in the mouth. #BOSpoli #MApoli

Morning, Mass. 🌧️ What Gov.-elect @maura_healey and Boston Mayor @wutrain did and didn't say about their first post-election meeting. Plus:
— Mass. ranked least conservative legislature by CPAC
— <12,000 mail ballots rejected, many for being late https://politi.co/3h4dE6X #mapoli

Imagine if you will all of the townies that vilified @RicardoNArroyo that are upset that accused abuser of multiple women @stoolpresidente is having trouble in his quest to be the richest violent misogynist in #mapoli.

Breaking News: Germany arrested dozens of people suspected of supporting a domestic terror organization that was planning to overthrow the government. https://nyti.ms/3Y6iz7S