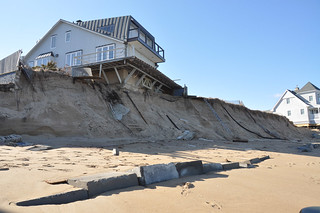 Here in Massachusetts, climate science denial may be politically toxic, but when it comes to accelerating sea level rise fueled by global warming, some local officials are just as in denial about as their science-denying counterparts in North Carolina.

Climate Central has an interactive sea level rise tool showing how even 5 feet of sea level rise – virtually guaranteed by the carbon pollution we’ve already put into the atmosphere – will put more than 10,000 homes under water on the Southcoast alone. As Ariel Wittenberg reports in the Standard-Times, many local officials are governing as though the threat doesn’t exist:

Asked about the maps, most SouthCoast municipalities say they have dealt with flooding issues as they happen, and have not made plans to combat or adapt to climate change and sea level rise specifically.

In Dartmouth, for example, Town Administrator David Cressman said he and the police chief are “aware of the vulnerabilities” of the police station, which was renovated 10 years ago.

“At times I wondered why they were doing that if it is in a flood zone,” he said.

In my town of Fairhaven, where Sconticut Neck is set to become an island, austerity means kicking the can down the beach for future generations to clean up:

“It’s something that is not right on our doorstep and we are thinking about balancing our budget and keeping from making significant cuts,” he said.

Screw the grandkids, I want my property taxes cut now!

Harriet Hageman: "Joe Biden is the largest or the most destructive human trafficker in our history."

This is the nutjob who's running against Liz Cheney.

The lack of coordination between the @mbta & local towns heading into friday's #MBTApocalypse is shocking. #mapoli

A four-week shutdown of the Orange Line starts Friday.

Local mayors are still trying to get answers on what the stopgaps will look like.
https://www.wgbh.org/news/local-news/2022/08/16/local-mayors-and-town-managers-still-lack-clear-answers-from-the-mbta-ahead-of-orange-line-shutdown

Enough with the Super PACs!

Democratic campaigns should be people powered not powered by the Waltons or even Republicans.

THE BLACK MEN ON THE GUN VIOLENCE LOG EVERYDAY ACROSS THE COUNTRY IS JUST RIDICULOUS!

THE BLACK FEMALES ON THE GUN VIOLENCE LOG EVERYDAY ACROSS THE COUNTRY IS JUST RIDICULOUS TOO!

SINCE DONALD TRUMP LEFT? THE BLACK POLITICAL VOICE HAS BEEN SILENT!