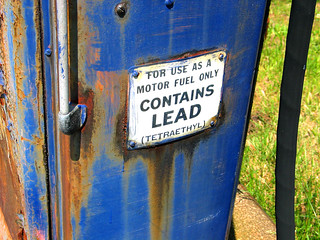 Studies have shown a strong connection between the phase-out of lead in gasoline starting in the mid-1970s and a plunge in violent crime in the following decades. As Kevin Drum reports at Mother Jones, a new study is connecting lower levels of childhood lead exposure to a later drop in the teen pregnancy rate:

For years conservatives bemoaned the problem of risky and violent behavior among children and teens of the post-60s era, mostly blaming it on the breakdown of the family and a general decline in discipline. Liberals tended to take this less seriously, and in any case mostly blamed it on societal problems. In the end, though, it turned out that conservatives were right. It wasn’t just a bunch of oldsters complaining about the kids these days. Crime was up, drug use was up, and teen pregnancy was up. It was a genuine phenomenon and a genuine problem.

Most likely, there was a real problem, but it was a problem no one had a clue about. We were poisoning our children with a well-known neurotoxin, and this toxin lowered their IQs, made them into fidgety kids, wrecked their educations, and then turned them into juvenile delinquents, teen mothers, and violent criminals. When we got rid of the toxin, all of these problems magically started to decline.

Today, we’re debating whether to cut the toxic heavy metal and carbon pollution from coal by shutting down the oldest, dirtiest coal-fired power plants. But the benefits aren’t hidden – we know coal kills thousands of people every year and causes thousands more asthma attacks in children.

Electricity rates and jobs are obviously important, but why do reporters talk almost exclusively about those, and hardly at all about these very real impacts on our lives? When did human health become a sidebar story?

The drop in the crime rate and the low levels of crime through the biggest recession since 1929 have been somewhat of a mystery. The lead hypothesis offers some explanation and it has gotten confirmation from international statistics as well.

Thomas Midgley, Jr, who championed the original use of lead in gasoline, was also a key player in the introduction of Freon (chlorofluorocarbon) for refrigeration. We stopped using that, too, and the Ozone Hole it created has shrunk, and appears to be ending..

This theory (that lead levels were connected to crime rates) has been around for a good while now. At least since 2007: http://freakonomics.com/2007/07/09/lead-and-crime/

It fails to gain traction for the very reasons alluded to in the article you cite. The solutions to reducing lead poisoning (an ongoing and important effort across the country but especially for those living in older housing stock) are increased environmental regulations and assistance for poor people. In contrast, the most vocal law & order folks prefer “solutions” that don’t affect them so directly or cost as much. Imprisonment and more religion in public spheres.

…between lead in gasoline and poisoning people since we don’t consume gasoline (I hope). Is being around the fumes enough to trigger this?

The lead winds up in the air, soil, and water, so we were eating and drinking it, too.

One of the places that gasoline-derived lead can be found is in the organic soils of forests, also called the forest floor. The high concentrations of organic matter in forest floors provide ideal places for lead to bind.

The climate leaders that have updated their emission pledges (NDCs) are on track to reduce GHG emissions 0.5% from 2010 to 2030.

These are climate leaders!

Blowing a year-long chance to think bigger and smarter about transportation policy was in Phase I.

“The filibuster” is not an inanimate thing.

Well gosh that was never true, to say the least. #StockholmSyndrome