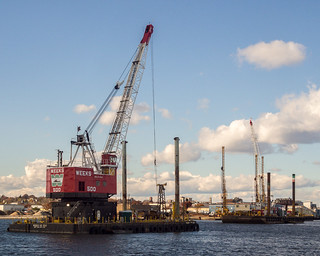 Cape Wind has signed a lease agreement to stage its 130-turbine project in Nantucket Sound out of New Bedford’s South Terminal, reports Ariel Wittenberg in the Standard-Times:

Cape Wind will pay a total of $4.5 million in rent to the Massachusetts Clean Energy Center, which owns the 28-acre facility, for two years. During that time, Cape Wind will be the only operator of the facility and the terms of lease allow for two one-year extensions.

Cape Wind has said that the assembly, staging and ocean construction of the project will create 600 to 1,000 jobs. Once in operation, the project is expected to employ 150 people, at least 50 of whom are expected to be based in Falmouth to do maintenance on the Nantucket Sound turbines.

The lease agreement is significant not just for Cape Wind but for New Bedford and the commonwealth’s future involvement in the offshore wind industry. City officials have long stated that being the first port to stage an offshore wind farm will help the city to attract future projects and industry manufacturers.

Cape Wind also had held a lease option in Quonset, Rhode Island. Audra Parker of the William Koch-funded “Alliance to Protect Nantucket Sound” had been trying to use the Quonset option to divide Massachusetts on Cape Wind, warning Cape Wind would dump New Bedford for Quonset. Various local anti-wind activists like Frank Haggerty joined Parker in pushing the talking point, demonstrating their reasonableness in the comments of Parker’s letter:

Y’know, the Nazis had solar panels that they made the Jews wear.

The bottom line here is that Cape Wind is delivering on its promises to harvest clean offshore wind energy for Massachusetts and to bring new, long-term jobs to New Bedford. Meanwhile, the polluter blockade of New Bedford wind energy jobs has finally and fully crumbled. If Bill Koch wants to keep fighting to protect his beachfront estate views from the horrors of distant windmills, it’s going to mean putting real people out of work in a city that desperately needs the jobs.

Will Koch carry on his quixotic crusade, or will he finally tell his army of lawyers and lobbyists to stand down? We’re about to find out.

Inigo Montoya: But this is Buttercup’s true love – If you heal him, he will stop Humperdinck’s wedding.

Miracle Max: That is a noble cause. Give me the sixty-five, I’m on the job.

If the length of discussion is zero when the Nazi comparison is made?

Cardoza did mention visiting Germany, a known foreign country, renowned for its Nazis. Aren’t all our American Nazis imported from Germany?.

And many others who made really good Nazis.

This Haggerty moron would probably have a cow if he ever figured out that you have to go to Poland to see Auschwitz.

You’re assuming that he knows there’s a difference between Germany and Poland.

One major backer of the Alliance has lost ALL his money and will not be shelling out any more to support the madness.

Recently, somebody went to the 990’s and published Ms. Parker’s six-figure salary…and the reaction from usually sympathetic local media was their jaws dropping and hitting the floor, as reporters and editors aren’t doing all that well these days. And the Town of Barnstable is getting impatient with funding lack of court success when they need overrides for a fire station.

The fat lady is gargling.