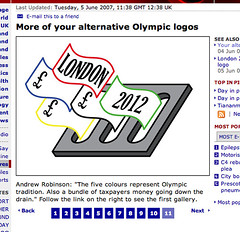 You No Boston Olympics people think you can stop Boston 2024 just because public support is cratering and there are a hundred other things on which we could better spend those billions?

Things like “logic” and “the public good” go out the window when there’s this much money pushing to subsidize the construction and staging of Boston 2024:

Former Gov. Deval Patrick will be compensated $7,500 per day when he travels on behalf of the backers of a bid to bring the 2024 Summer Olympics to Boston, according to organizers.

At that rate, Patrick could score half a million dollars by working just 67 days.

We’re still nine years out and consultants have already turned Boston 2024 into a cash cow paying out well over a million dollars a year in salaries alone, along with untold fees to dozens of consulting firms. The Herald’s Chris Cassidy has the full salary list.

But hey, what’s a few million now when John Fish & friends stand to take a huge slice of those taxpayer billions?

In the spirit of transparency, No Boston Olympics is today releasing its own compensation information:

No Boston Olympics is a volunteer organization. […]

We need your support to keep fighting. Please help us level the playing field by contributing $20.24 or more here.

The Biden campaign announced a 2035 clean electricity standard and a commitment to 40% climate investments in communities of color today. Massive, massive wins for the environmental justice and climate movements. I promise it's more important than the other discourses occurring.

Your periodic reminder that the gas Enbridge wants to pull from PA to go to Canada is unneeded. Unneeded in MA, a little taken in ME, not needed in Canada.... hmmm, where would it go? Who'd have to suffer for exported gas overseas?