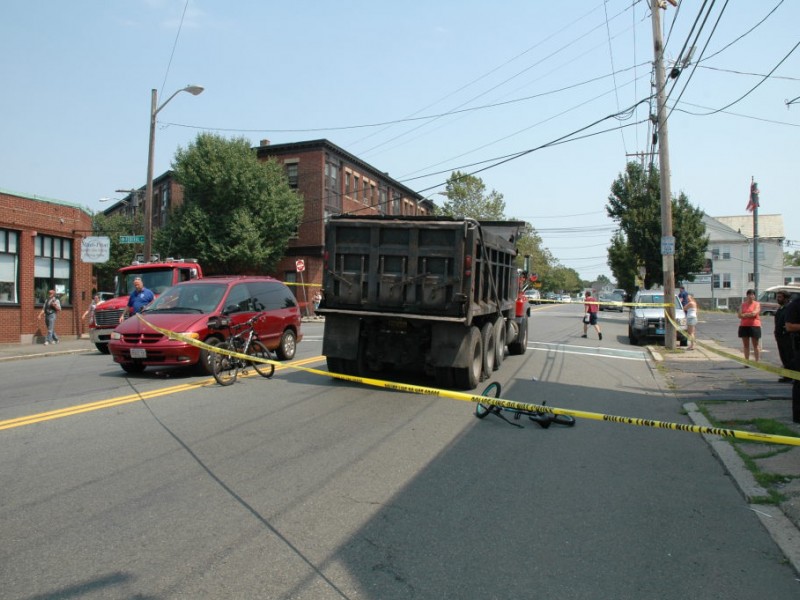 Bicyclist hit by truck in Salem, 2011

Fed up with a transportation planning process they say perpetually prioritizes cars over the safety of people on bicycles, the entire Salem Bicycling Advisory Committee quit last week, as Dustin Luca reports for The Salem News:

The group works from a master plan of objectives that was drafted in 2010, according to Ernie DeMaio III, a bicycling enthusiast who was a member of the committee until last week.

Since the committee was created, he said, “biking has become much more popular, not just as a recreational tool but as an alternative means for green transportation across the city,” DeMaio said. “We implemented all the recommendations of the master plan and have been working on putting together a new master plan.”

The situation with the intersection at Lafayette and Loring followed a trend of instances that DeMaio said had been wearing on the group.

“We’ve seen it repeatedly — the projects the city advances, where the designs for roadways are still being done in old-fashioned ways with old-fashioned standards,” DeMaio said. “By the time a project reaches us, where we can have a say in how it can be built, we’re frequently told, ‘We’re too far to change things now.’” […]

In a letter to [Mayor Kim] Driscoll dated Oct. 14, the eight members wrote that “bicycling amenities and infrastructure are (and should be) integral and essential elements in a multi-user street planning policy. … The SBAC does not consider bike infrastructure to be luxuries to be bartered with when road or project improvement budgets or schedules are challenged.”

Even though Massachusetts ranks as one of America’s best states for bicycling, head outside the Boston area and most streets remain woefully incomplete, prioritizing vehicle speed over the safety of people on foot and on bikes.

I’m sorry that the SBAC has given up on making progress from inside the system, but I hope the story serves as a wake-up call to Salem city government.

Even casual inspection of the photo, either in the thread-starter or contemporary news reports of the crash, shows the utter disregard for bicyclists (and even pedestrians, for that matter) at the scene of the crash.

I notice, for example, a utility pole squarely in the middle of the sidewalk.

It is just not that hard to narrow the portion used for motor vehicles to one lane in each direction, and add a paved bikeway at each curb, separated from both pedestrians and motor vehicles. Boston street is FIVE LANES WIDE where this accident occurred.

Streets like this are a disgrace in a 21st century first-world nation.

head outside the Boston area and most streets remain woefully incomplete, prioritizing vehicle speed over the safety of people on foot and on bikes.

Head inside Boston, and the conclusion is the same. Sure, Boston has better sidewalks than most of MA, but they sure as heck weren’t laid out in the 20th century to ensure pedestrian safety.

It’s true, things are changing, and in some places faster than others. Still, Boston remains a fragmented collection of quality ped and bike amenities, isolated from each other by Robert Moses era designs that push as many autos through as possible and law enforcement that is loathe to pull over motorists on arterials during rush hour for endangering others, lest it slow down the commute of other motorists.

And that intersection is unsafe for pedestrians too. They should really reformat the road. I think part of the problem is that Salem is perpetually cash strapped, so they put all the improvements in the touristy part of downtown, neglecting the neighborhoods south of the river. Driscoll is a good mayor, but I am glad to see the bike group put pressure on her administration and the City Council to address those neglected areas.

More municipal bike committees should be putting pressure on their respective municipalities. I’ll put my hometown, Brookline, high on the list of places that has inadequate and inconsistent bike policies.