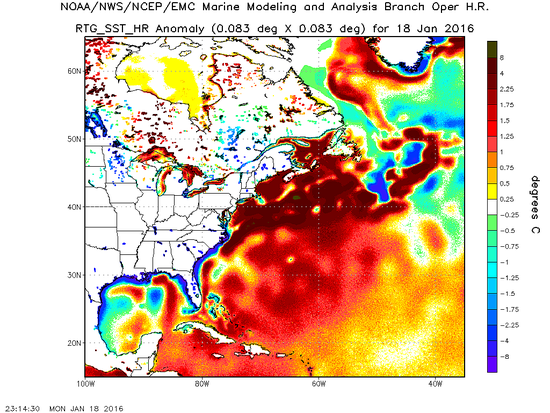 Lifelong New Englanders will often lament during exceptionally pleasant weather that we shouldn’t enjoy it too much because we’ll be punished for it later. There’s no reason to believe Mother Nature keeps a Puritanical ledger ensuring that we experience a minimum amount of suffering during the year.

But this year … this year the old Yankees are being proven right. All those days of shorts weather in December are about to come back to bite us. A major winter storm is expected to hit the East Coast from DC up through New England this weekend, and as Eric Holthaus explains at Slate, it’s forecast to be fueled by that December heat still stored up in off-the-charts-warm Atlantic waters:

The same atmospheric forces that have contributed to the exceptionally warm winter so far will help steer tremendous amounts of moisture toward the coast. Climate change and El Niño have pushed water temperatures in the Atlantic to near record highs right now, which could offer something similar to the boost a landfalling hurricane sometimes gets when traversing the Gulf Stream—a rapidly strengthening storm, though with snow instead of rain.

Next time certain commenters are telling us to stop worrying and enjoy global warming, I’ll be over here doing my impression of Ned Stark from Game of Thrones (itself a global warming parable): Winter is coming. Better go buy the stores out of milk & bread before the white walkers come!