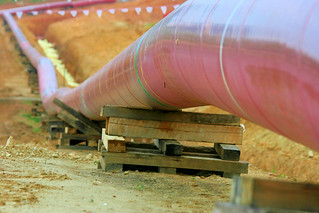 What’s most telling about the survey is the words it carefully avoids mentioning. It never says climate change, fracking, or pollution. It also never gives respondents a choice between fracked gas and clean energy (or maybe they just didn’t release those questions).

Keep in mind these results come despite questions carefully crafted to get the best answers for Big Oil:

The results should be sobering for politicians like Gov. Charlie Baker considering whether to support a tax for new or expanded gas pipelines. It gets even worse when you take a look at the electricity bills of the states most dependent on fracked gas.

Does Dependence on Fracked Gas Bring Down Prices?

The survey clearly shows the American Petroleum Institute wants us to believe we pay outrageously high energy costs. It’s true that Massachusetts has the 7th-highest electricity rates. But Massachusetts only pays the 31st-highest electricity bills, according to the US Energy Information Administration. That’s thanks in large part to our investments in energy efficiency. Massachusetts consistently ranks first in America in energy efficiency and those investments have delivered $1.2 billion in net economic benefits.

But what super-cheap fracked gas from Pennsylvania I hear about? Why can’t we be like them? The highest-producing gas states, their electricity bills, and where they rank on highest electricity bills in the lower 48 (all 2013 data):

But importing more fracked gas – more is better, right? The states that consume the most gas per capita (2011 data), and where they rank on highest electricity bills in the lower 48 (2013 data):

We Need Diversification, Not Deeper Dependence

Take a look at ISO New England at any given moment and you’ll find we’re already dependent on gas for around two-thirds of our electricity. Add in nuclear and we get more than three-fourths of our electricity from just two sources. Hydro accounts for less than 10% and renewables like wind & solar are down in the low single digits or even a fraction of a percent. We’ve barely scratched the surface of our clean energy potential.

Meanwhile, fracked gas is scientifically shown to destabilize our climate, pollute our air and drinking water, and trigger earthquakes in fracking country. And every single cubic foot Massachusetts burns is bought from out of state.

If we’re serious about safer energy and a stronger economy, we can’t invest another dime in new or expanded fracked gas infrastructure. And we can’t let the American Petroleum Institute’s ad campaign convince us otherwise.

…isn’t for our benefit anyway, right? There seems not to be any logical reason we should pay for it. Also, if you don’t mind can you explain again ho electricity rates are different from bills? Are you saying even though the cost per unit is high we collectively use fewer units?

Let’s use gasoline as an example.

To beat this metaphor to death, gasoline prices are lower in Texas, but they all drive 13 mpg pickup trucks. Gasoline prices (rates!) are higher in Massachusetts, but because we all drive Priuses, we actually spend less per month on gasoline (bills!)

Lobbied heavily against efforts to increase energy efficiency and was successful. Screw the planet, screw the state, there are real estate commissions to be made! And with those commissions, “donations” to political races.

All in Blue Massachusetts.

The distinction is worth making at every turn.

This brilliant @theintercept video [literally] painting a picture of a Green New Deal future by @AOC @mollycrabapple and @NaomiAKlein just got nominated for an Emmy.

Creative is a force multiplier in politics. Don’t take it for granted.

Is @joekennedy ’s father moving his leftover campaign cash to help him?

How does that fit in with this? 👇

@BrianPhillipsJr @EdMarkey In the interim, could you suggest Joe’s dad return the Globe’s call to answer whether his old campaign dough is being shifted into the race?

Microsoft is going carbon-*negative* by 2030.

Don’t let your reps characterize that as a success. The MA House continues to fail at the basics of protecting the public.

This @Vox explainer from @drvox does a great job breaking down our commitment to be carbon negative by 2030. We want to push ourselves, and our industry, to do better when it comes to fighting climate change. https://www.vox.com/energy-and-environment/2020/7/30/21336777/microsoft-climate-change-goals-negative-emissions-technologies

Don’t know who needs to hear this, but “Kennedys getting shot” jokes are not funny and not OK!

If stuff like that is funny to you, please stay far far far away from @EdMarkey - this isn’t your scene.

Genuinely disgusted by the comments under this tweet. Revolting and not at all “progressive.”

I hope that Senator Markey and his team publicly condemn the violent rhetoric of some of his supporters. It’s about time he does. https://twitter.com/alxthomp/status/1291574194610638848

.@AmbassadorRice still has millions invested in oil and gas companies?

Including over $100,000 in TC Energy that’s building Keystone XL?