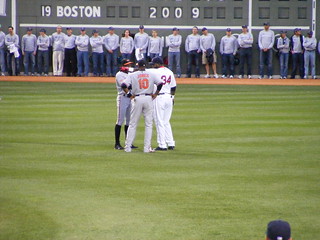 The Red Sox have apologized after Monday night’s episode of racial harassment by a fan or fans at Fenway Park against Baltimore Orioles outfielder Adam Jones. Gov. Charlie Baker called it “shameful” and Mayor Marty Walsh condemned the taunts. If you’re surprised it could happen at Fenway in 2017, you haven’t been listening to Boston sports talk radio.

I’ve been listening as Michael Felger and Tony Massarotti on The Sports Hub have been whipping fans into a frenzy ever since Manny Machado spiked Dustin Pedroia on a slide into second, demanding the Red Sox try to hurt an Orioles player in retribution. Anyone who disagreed wasn’t a real fan. After Pedroia himself wisely tried to defuse the situation, Felger & Massarrotti insinuated he was a traitor.

Surely local sports talk radio hosts will try to claim they didn’t mean to whip up THIS kind of hate. Sorry, but you don’t get to incite the mob, then disavow it when it rages across lines you didn’t plan on.

Hosts at The Sports Hub are all-white and all-male. WEEI has some diversity but is also all-male. WEEI’s Kirk Minihan called stalking victim Erin Andrews a “gutless bitch,” “joked” about murdering Roger Goodell, and was suspended for screaming at a coworker. His punishment? He was promoted to morning show co-host.

The Sports Hub’s Felger once dragged a sports reporter’s name through the mud over unsubstantiated allegations she had an affair with Jason Varitek. Weird how sports talk radio always calls the woman a slut for having an affair, while man’s integrity is never questioned. I’m sure it has nothing to do with every single Boston sports talk radio host being male! Felger has also gained national attention recently for saying only lazy people like the Celtics’ Al Horford want to spend time with their newborn children.

For Boston sports fans, one episode can set back years of progress embracing black stars. They have a lot of making up to do, and it should start tonight with a standing ovation for Jones, as suggested by WBZ’s Dan Roche.

More broadly, it’s time for Entercom, which owns both stations, to face questions about its role in the Boston community. We should also take a close look at who’s advertising on Kirk & Callahan, sponsoring their hate.

It’s real-and it’s a real problem. I grew up in Cambridge and have incredible friendships with people all over. My own wife has never felt fully welcome in Boston. Part of it is the cold shoulder and attitudes compared to the Midwest Nice she grew up in, and part of it is she feels more like a minority here than she does in Chicago. It didn’t help good friends of ours who came up from NYC to visit us last New Years were called the n word as soon as they stepped off the tracks at South Station. Or that my black niece and nephew get profiled at the Stoneham Marshalls and had their hair played with by strangers up in New Hampshire.

We got a lot of work to do. I think singling out Boston as a racist city lets other city’s off the hook, it’s easy for people to go there and pretend it’s just a Boston problem. On the flip side to deny Boston is racist is to deny the truth. This is a segregated city in a starkly segregated state with very clear racial divisions that we have yet to overcome. I am working in my best way to overcome my own past ignorance and defensiveness and really listen to the people of color in my life who tell me their perspective. If everyone started doing this we’d be a lot better off. Racism is still a huge problem for the country, and for Boston in particular.

As @flounder_MA points out on Twitter, Kraft, Belichick & Brady have mostly gotten a free pass for their endorsement of bigoted Trump without our beloved Patriots being tied to the “Boston is a racist sports city legacy.” Why? Shouldn’t that be part of the conversation?
https://twitter.com/flounder_MA/status/859447405745405958

And as @lukeo’neil points out, at the White House Super Bowl event last month both Trump and Kraft called out to Callahan telling him they were his biggest fans.
https://twitter.com/lukeoneil47/status/859442072041992192

Cognitive dissonance. Brady and the Pats are still really popular because they keep winning. I’ve always disliked Kraft for pitting us against Hartford for public subsidies he didn’t need back in the 90s. But the Trump stuff is putting it over the edge.

My wife hated the Pats long before this and I don’t really have a rebuttal to it, other than we all root for people we wouldn’t be rooting for if they weren’t on our team. Curt, Tim Thomas, and who can forget Hernandez? For her it’s basically Ditka and Hampton (who are Trump former 85 Bears) and Rose and Kane (who have had issues with the law).

This is why I have ZERO use for at least Boston-style professional sports. Yes, it’s disgusting. Yes, it’s obscene. Yes, it’s a disgrace.

It is not surprising. To me, complaining about this is like going to a rock club and complaining that music is too loud.

I see precious little difference between fans using the “N-word” and the jocks in my 1970s high school who walked around beating up boys because their hair was “too long”. This is what happens when we idolize a culture that says “anything goes” so long as it results in a “win”.

This idolization of professional sports is, in my opinion, why so many Americans are unable to distinguish between winning a football game and starting WWIII.

“Make America great again” has more in common with “Hooray for my team” than anything remotely connected government or policy.

I just don’t follow professional sports anymore. It’s a world too far removed from the world as I would like it to be, It is corrupted by money. Lance Armstrong was the final blow to my appreciation and respect for professional sports.

Here’s what Kirk and Callahan will say tomorrow:

Show us the evidence.

And frankly they will have a point. I believe Adam Jones about the insults, but before we indict the entire city, we need to be sure what happened. If people yelled a racial slur at Fenway loud enough for Jones to hear in the outfield, then there are HUNDREDS of people who also heard it. Do we have a source quoting these people?

Re: the charge of throwing a bag of peanuts, that seems racially charged in light of the slur, but it might just be a thrown bag of peanuts.

I’m not saying people are over-reacting, but they might be. I’m saying that’s what some will say, and this will become a Rorschach incident that proves whatever anyone wants to prove.

Is Boston a racist city? YES. But the topic is more complicated than a few drunks at Fenway.

The Red Sox confirmed it happened. So: No, they don’t have a point. It’s racism denial.

The Red Sox statement in the original post condemns the incident, but does not CONFIRM it.

Adding — you do have a point that K&C engage in racism denial. They do that a lot.

Red Sox management and the MLB commissioner officially apologized, they escorted the specific fan who threw the peanuts out of the park and banned him, other fans on twitter confirmed they heard and saw the actions unfold in the stands. Scores of other black MLB players have come out saying it happened to them in the past-and only at Fenway. This is our problem and only by admitting it and owning up to it can we move on. I give credit to the Red Sox organization for forcefully responding to this, and one hopes the zero tolerance they adopted leads to lifetime bans when this occurs in the future.

I’ve said too much about this already, but

The whole city has to stop in its tracks over one guy?

I’d be all for this, IF IT HELPED. I’m not convinced it does. There’s something really screwy about the way we talk about race. I can’t pinpoint it or even articulate it, but the Red Sox patting themselves on the back over this, Walsh and Baker grandstanding … I just don’t think it helps. Ignoring it would be worse, but this reaction isn’t right either.

But if fans act out, must be a lone wolf ignorant drunk!

Well, this is disappointing; I hadn’t heard this before.
http://www.cbssports.com/mlb/news/david-price-says-he-heard-racist-taunts-from-red-sox-fans-at-fenway-park-in-2016/

#familycourt #mapoli @MassGovernor @MassLtGov
Probate and Family Courts PREFER convicted violent criminals to loving and safe parents - this is a systemic issue. How many more children have to disappear or die???

“Why would the Massachusetts court choose to place custody of Harmony with this horrible individual?"

C'Mon! Same moonbats here gassing up the homie @donlemon for dropping this little truth bomb 💣 are the same ones sh*tting on the brotha while watching Clair folks on @MSNBC. Lemon need to drop the selective outrage to get on @NewDay and keep it real 24/7. #NITM #BOSpoli #MApoli

"That’s bull ... That’s BS. And you should be ashamed of yourself. You are a hypocrite." @donlemon unloads on lawmakers who want to honor Martin Luther King, Jr. while standing in the way of voting rights reform by opposing the filibuster.

Thank you! The outpouring of support has been inspiring. I welcome you to this movement and look forward to connecting with my neighbors across the Commonwealth to realize a stronger, more vibrant and expansive democracy! Together, we can do it! #mapoli

@BostonGlobe @soledadobrien C'Mon! Sometimes silence is so louder than words. Too bad I don't do silence well—as I update my 2022 things to do bucket list. @thedemocrats wonder WHY Trumpers ignore them when they suggest they stop looking the other way. Truth IS—they learnt it from the Dems! #BOSpoli #MApoli

@BostonGlobe Representation only matters in Boston when applied elsewhere. I wonder IF the big homie @soledadobrien would take a stab at responding to this question?🙄🤦🏾‍♂️—as mum's the word on #BOSpoli & she's more than qualified & knowledgeable on this subject matter?!
https://twitter.com/NotoriousVOG/status/1483510728510394374ao