State Rep. Colleen Garry of Dracut (36th Middlesex – Dracut & Tyngsborough) has served in the Massachusetts House for more than two decades, since 1995, and she has developed a record of being arguably the most conservative Democrat in the legislature.  Notably, despite the lengthy tenure, she has recently felt the need to lie to her constituents and fabricate accomplishments. 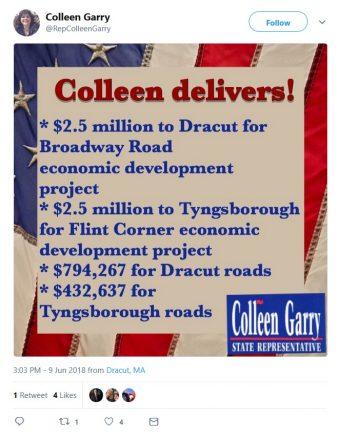 Note specifically the headline that reads “Colleen delivers!”  It is clear that she is personally taking credit for securing the funding items listed in the graphic.  If not for her work as State Representative for Dracut and Tyngsborough – at least in substantial part – these funding items would not have been secured for these communities, according to her.

Now, on its face, that’s a totally legitimate campaign message for an incumbent.  Absolutely, take credit for accomplishments that you have achieved for your constituents.  If you pass (or somehow help pass) a piece of legislation, a budget amendment, etc. that helps your communities, take a victory lap, sure.  But…

I should note here that I have spent a number of years working in both houses of the Massachusetts Legislature.  I know that when someone makes reference to funding for roads, odds are, they’re talking about something called “Chapter 90” transportation funding.

The Chapter 90 Program is a state program that originated in 1973.  In a nutshell, it is state funding apportioned to municipalities for road-related repairs and infrastructure.  Very importantly for the purposes of this post, it is relevant to note that the funding is apportioned based on a set formula taking into account a given municipality’s miles of road, overall population, and employed population.

Colleen didn’t “deliver” that money to the communities of her district any more than you or I delivered that money.  Even if the state representative seat happened to be entirely vacant, Dracut & Tyngsborough would receive precisely that same amount of money.  And, given that Rep. Garry has served in the House for more than twenty years, she obviously must know exactly how the Chapter 90 Program works.  In other words, she lied to her constituents about “delivering” funding that she did not deliver.  She took credit for a fake accomplishment, something that happened entirely and completely independent of her even being in the legislature.  In one tweet, Colleen Garry told the voters of Dracut & Tyngsborough a $1.2 Million lie.

So, why did she do it?  Why did Rep. Garry lie to her constituents about a fake accomplishment?  I suppose it has something to do with Rep. Garry facing the toughest primary challenger of her legislative tenure.  The very conservative Rep. Garry is facing a Democratic primary challenge from Sabrina Heisey, a Dracut School Committee member, founder of the Greater Lowell League of Women Voters, a director of the Dracut Mom’s Group, a Girl Scout leader, an adoption advocate, and, by profession, a grant manager at Children’s Hospital.  Where Rep. Garry is, again, extremely conservative for a Democrat, Sabrina is pro-choice, pro-LGBTQ equality, pro-gun safety, etc.  In other words, Rep. Garry would have difficulty winning a Democratic primary on the issues, so she wants to use her long tenure to her advantage and tout the bacon she has brought home to the district.  However, Rep. Garry, disappointingly, is apparently willing to lie to her constituents in order to inflate the numbers on the amount of bacon she has, well, delivered.

If it bothers you that Rep. Garry is willing to deceive her constituents (or that she is as conservative on so many issues as she is while still calling herself a Democrat), you can support her primary opponent, Sabrina Heisey:
Sabrina Heisey’s website: http://sabrinaheisey.com/
Like Sabrina on Facebook: https://www.facebook.com/SabrinaHeisey/
Follow Sabrina on Twitter: https://twitter.com/sabrinaheisey

Since this is your second post on this race and as far as I know you have not moved into the district, I’m starting to wonder if you have anything you need to disclose.

Fair question, but nope – zero to disclose. I haven’t met the candidate or know any of the staff/organizers (as far as I know). I am not a staff member, and I haven’t even made it up to Dracut/Tyngsborough to volunteer (*yet, though I intend to over the summer). Donated a whopping $18 in April when she kicked off and another whopping $18 earlier this month. Just very interested in this race as a meaningful and transformative primary, in large part given how conservative (and multi-phobic) Garry is. Very glad Garry has a serious primary and eager to help. (Similar deal for the general election out of the Andover area between Tram Nguyen and Jim Lyons.)

Not only should Representative Garry not take credit for “delivering” money that is allocated by a set formula, she should acknowledge that the amount of money that Dracut and Tyngsboro received under that formula would have been lower if her position had prevailed.

In 2013, the Legislature increased the gas tax, which funds transportation projects, from 21 cents a gallon to 24 cents. Representative Garry voted against that increase (the link is here — look up Roll Call #56. A “yes” vote is to strike the 3-cent increase).

She may well have preferred that her constitutents save 3 cents on a gallon of gas instead of the towns she represents getting more transportation money, but in that case she shouldn’t be touting a result that she opposed.

Well stated Matt. Garry is an abysmal legislator whose presence is noted only because of her extremism and not because of accomplishments or skills she brings to the House. It sounds like she has a worthy challenger but I would honestly prefer a Republican to Garry if her primary challenger loses, as her behavior in the Democratic caucus is awful.

Meanwhile, from slightly to the south, comes this press release:

The legislation authorizes $200 million each year for the next 3 years for infrastructure improvements in municipalities across the Commonwealth. This multiyear investment provides cities and towns with the ability to plan their construction needs in advance, giving communities access to predictable and consistent funding.

“This program is an essential tool that allows municipalities to fund local projects to make much needed repairs to damaged roads and bridges right at the start of construction season. I’m proud to have secured funding to support these essential projects in the 4th Middlesex that will make substantial improvements to our infrastructure and enhance the quality of life for our residents,” said Senator Friedman.

“Chapter 90” funds are allocated using a longstanding formula based on community road miles, population and employment.

Yes the amounts are set by formula, but the Legislature has to vote on Chapter 90 funds each year or it doesn’t happen. In principle it’s not that different than Chapter 70 school aid (just a more complicated formula). So yes, this might be a little political hyperbole, but it hardly rises to the allegation here.

The MA legislature needs to get serious about passing a sweeping climate bill. Other states & nations are doing it. It doesn't impact the budget. They've got all the facts they need. MA is falling behind on climate action. #mapoli https://twitter.com/Sensible_Energy/status/1266364246616662016

Hey @binajv — full support for this.

example: Trump’s calling for the US military to open fire on American protesters, and not one news outlet/newspaper will call for Trump’s resignation in next 48 hrs

We moved past tired long ago. We're weary, sad, & angry that so many of our self-professed allies refuse to acknowledge the white supremacy underlying the violence inflicted upon us with impunity.

We shouldn't have to fight for the right to exist peacefully in our black skin.

Last year at this time @MassAGO said on the radio with @jimbraude & @MargeryEagan that @massdep "really bungled" the proceedings re air quality permit for the fracked gas compressor station being forced on Weymouth. Yet, here we are today with the compressor nearing completion.

Thinking a lot about this Langston Hughes poem RN