We ignore it at our peril. 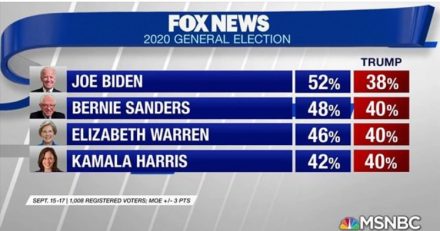 Ukrainegate means foreign policy / national security is going to be THE dominate issue of the 2020 election and that plays right into Joe Biden’s strength.

My crystal ball shows me a VERY different picture from yours.

While still unlikely, there is some possibility that Mike Pence will be a casualty of Ukrainegate along with Donald Trump. We should not forget that William Barr is also implicated. Mitch McConnell is already being called “Moscow Mitch” because he has been so eager to advance the Russian agenda — I wonder if Russia has kompromat on him, Lindsay Graham, and some others.

I still think the central issue in the 2020 campaign is going to be wealth concentration and what we’re going to do about it.

Of all the Democratic candidates, Biden is far and away the candidate with the most problems on that issue.

What problem does Biden have on political corruption? Be specific.

If his son had not taken the no-show job with the largest oil company in Ukraine — headed by the person at the top of the world’s list of corrupt Ukranian corporate players — Donald Trump would not have been having the exchange in question.

I know of no other current Democratic candidates who have family members attempting to cash in on their familial relationship to the candidate in anything like the way that Hunter Biden has been doing for a very long time.

That’s the problem I think Joe Biden has on political corruption.

And that story opens the door to other questions of the pervasive, legal kind of corruption. Why is he the candidate doing the most major donor events? Including with fossil fuel execs? Why did he tell rich donors “nothing will fundamentally change”? Why was he called “The Senator from MBNA” for decades?

Nobody is ignoring these polls. I have no doubt that they accurately measure (within the margin of error of the poll) the results of the poll.

Polls change, because the electorate changes. Those of us who put less emphasis on these polls than you are not ignoring them, we are instead acknowledging reality. It is possible to find good solid weather forecasts, based on very sound science, for weather 10 days in advance. I would advise extreme caution in using those 10-day forecasts as anything except entertainment.

Some of us have seen this rodeo before.

I don’t disagree at all with any of these points, except strenuously disagreeing with your final one sentence paragraph: we have NOT seen this rodeo before. This is a new rodeo.

I agree that this is a unique context.

In my view, that uniqueness has no impact on the volatility of polling. If it has any impact at all, I suspect it makes the polling more, rather than less, unstable. When the stakes are higher, I think people’s opinion changes more in response to a given factoid or episode.

The rodeo I was referring to is polling more than a year in advance of an election. I wonder if perhaps you are referring to the general context.

So, they can all win, and this was taken before the Ukraine news that involves two of the people in that poll.

What this poll shows me is that it is more likely than not, the GOP cuts bait on Trump. Other polls are showing support for impeachment rise to include 42% of the American public, after being stuck at 25% for most of the summer.

It also shows me that any Democrat could beat him and there’s no need to settle for Biden when Warren is doing just as well and would make a far better President.

When 20 GOP Senators see the handwriting on the wall, they will vote to remove Mr. Trump from office. They will claim great reluctance, and say that they “simply have no choice”. They will claim they are “doing the right and honorable thing”,

The GOP is, in fact, in chaos. They were in chaos before Donald Trump was nominated. The conflict between the Tea Party and “mainstream” drove Paul Ryan from office (as well as his own fundamental incompetence), and created the fissure that Donald Trump exploited to accomplish his hostile takeover of the GOP.

The true tragedy here is that America is in crisis. I view all of this as symptoms of the continuing spread of our pervasive economic disorder. Money in circulation is the oxygen of a consumer economy, and our extreme wealth concentration means that we are literally strangling. Even the Boston Globe reports this morning that “Income inequality in America is the highest it’s been since Census started tracking it”.

It’s MUCH more exciting to run “news” about crazy religious extremists and Russian assets (especially when the disgraced party in power really ARE Russian assets).

“The Right Wing assassinated the characters of 3 of our last 4 nominees. They’ve got it down to a science. They’ll run the same playbook next year — no matter the opponent. None are immune from fabricated smear. Dems fell for many in 2016. Can’t in 2020.” Phillippe Reines

I think the right wing is able to do that because there is so much economic suffering in America. People who are in pain and hurting are more vulnerable than people who are strong and healthy.

I think a candidate focused on correcting wealth and income concentration is better able to fend off such attacks.

They also assassinated the character of Obama and he won twice. Because he was such a good candidate with a good campaign, and also didn’t have a ton of baggage.

Reines is trying to protect Biden in his comment.

Biden’s Ukraine issue is not the main or best reason to vote for another candidate, but I do think it is another chink in the armor about his only argument for running (that he is best positioned to beat Trump).

You’re right about needing a candidate that addresses problems and provides a vision for the future.

Clinton had “it’s the economy stupid”
Gore had (I don’t remember what Gore had – maybe it was “let’s keep going.”)
Kerry had “Bush is bad”
Obama had “Hope and Change”
Clinton had “Trump is bad”

Yeah, yeah, yeah, I know Kerry and Clinton had different taglines but those were the core elements of their campaigns going into the general election.

I’ll take “I’ve got a plan for that” or “Not Me. Us.” over “Trump is bad” this time around. Especially when the “Trump is bad” campaign does not have an alternative because “Pence is bad” and “the GOP is bad” have already been actively tossed aside.

I’m downrating this because I think you egregiously and unfairly misrepresent our 2016 campaign.

I also remind you that both Al Gore and Hillary Clinton won the popular vote.

The last months of the 2016 campaign were exclusively negative with a focus on trying to convert suburban moderate Republicans. I believe the stats show that ~96% of Clinton’s campaign ads and PAC ads supporting her were negative against Trump in the weeks leading up to the election.

If you win the popular vote and lose the Presidency, your campaign did it wrong. In 2016 we saw poor turnout in the communities that gave Obama a landslide in 2008. Those groups weren’t sold with a positive message and vision for the country in 2016.

In my view, your first paragraph is irrelevant whether or not it’s accurate.

In the second paragraph, I agree with you that poor turnout in urban minority neighborhoods in Michigan, Wisconsin, and Pennsylvania were a key factor in her electoral vote loss. The other key factor (which we’ve discussed elsewhere here) was record white turnout for Donald Trump in those same states (but not the same neighborhoods).

A BMG contributor at the time who was a professional campaign strategist attributed the poor turnout in those urban minority communities to incompetent organizing and failed GOTV efforts by the Hillary Clinton campaign in those neighborhoods. My recollection (over several face-to-face conversations in the monthly gatherings we did that fall) is that he explicitly disagreed with the premise that those groups would have been swayed with a more positive message and vision.

His argument was that the campaign took those voters for granted, did not visit them (despite repeated requests from local activists) and in some cases alienated them with campaign processes that the communities in question viewed as racist.

Each post-mortem that I’ve seen attributes the (narrow) loss and negative messaging to the October bombshell — just 11 days before the election — from James Comey (then FBI director) that further emails had been found and implying that additional charges against Ms. Clinton might be in the offing.

The GOP message in the final two weeks of the campaign was “Case re-opened”.

During most of the campaign, Ms. Clinton was doing everything a candidate can do to stay positive and on-message. The media wanted nothing to do with that. The ONLY coverage she got was of her fights with and criticisms of Donald Trump.

I agree with you that we have several candidates who are better choices for 2020 than Joe Biden. I do not think we need to further disparage our 2016 nominee to make that case.

I agree that this is the most important issue facing our country (it is why I supported Bernie last time). The problem is that we are not dealing with an ordinary Reublican candidate. We are dealing with an advocate of autocracy who effectively paints himself as just such a warrior, despite all evidence crying out that his representations are wildly false.

Being right on the issues will not be an effective shield this time.

I don’t see how your first paragraph connects to the second.

No matter who the candidate is, the winning candidate MUST govern after taking office. The GOP has had ENORMOUS success with bait-and-switch rhetoric and dogma — Donald Trump is certainly not the first candidate who has run on one platform and governed on a different one.

I think electing a candidate who is NOT just right on the issues but actually committed to addressing them is a sure-fire way to continue along the dysfunctional path we’re on.

If we don’t address wealth concentration, the party affiliation of the President doesn’t matter.

If anything, the reason they are so concerned about Biden as an opponent is they know that he will be by far the most difficult candidate to paint as they wish (I.e., with bottomless lies).

They are giving it their best shot right now, and it is not going well for them.

“The further a society drifts from the truth, the more it will hate those that speak it.” George Orwell

The GOP has become a cult of personality. I’m much less confident they cut bait.

"We're elected officials...And we have to intervene where we are." #mapoli

The Barr memo on the Mueller report was such a snow job, and it was metabolized so completely, and Democrats' response was so timid and Mueller's own handling so bungled, that we still have not sufficiently readjusted our priors to accept that there was most definitely collusion. https://twitter.com/maxbergmann/status/1281739290578432001

Let’s be clear: this is part of the cover up.

Stone was an accomplice to Trump’s collusion with Russia. But he didn’t give up what he knew on Trump, knowing Trump would protect him. This pardon is therefore likely illegal as its intent is to obstruct justice. https://twitter.com/woodruffbets/status/1281737047150125056