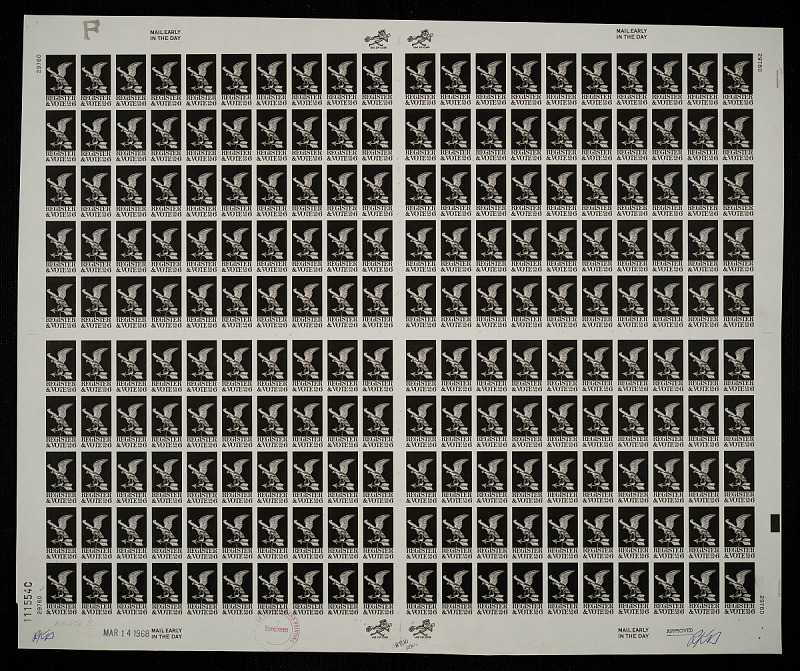 “Register and Vote” 6c stamps. The Markey campaign is set to save a bunch of these.

Thanks to Christopher for flagging this down: The SJC has made a rather uncomfortable “emergency” decision, in halving the number of signatures needed for some offices; extended deadlines; and required Sec. of Commonwealth Galvin to accept electronic signatures. That’s … a lot for a court ruling.

The justices shared Christopher’s discomfort at the potential of legislating from the bench, but the legislature’s inaction put them in a real bind: Either let something that is clearly unfair and unconstitutional go forward, or get out over their skis vis-a-vis separation of powers.

During those high court arguments, the justices appeared distressed to be addressing a problem that the Legislature has full authority to solve. More than one of the justices pressed the lawyers over whether the House might take up the matter in coming days.

House Speaker Robert A. DeLeo has been publicly silent on the issue.

Also, we need to talk about how ridiculously bottle-necked the signature-gathering process is. You can’t just go online and grab a pdf of a candidate’s nomination papers, print it out, sign it and mail it in. From the Secretary of the Commonwealth:

So the Markey campaign (e.g.) has had to get the papers from the Sec. of State, and had volunteers mail them out to willing signatories with a self-addressed stamped envelope. Cumbersome, slow, and expensive. Are you kidding me? In the year 2020 you have to do this? A “full list of locations” isn’t even published on the website? I don’t know if this is on Galvin or the legislature, but this needs to be changed: Nomination papers should be freely available, not dispensed from on high “by request”.

This would seem to put the Markey campaign in the clear, which had been mailing out nomination papers to folks in an expensive and cumbersome process. (There may be a silver lining, if the extra work pays off in organizing power in the coming months.)

“The bottom line: as of today, the campaign has, in hand, requests for 20,896 additional nomination sheets. This pace would have seen our campaign accumulate more than 20,000 certified signatures by the original deadline…” John Walsh, Markey’s campaign manager says

In any event, it’s a relief that our Massachusetts Supreme Judicial Court came to the exact opposite conclusion of the US Supreme Court, and ruled that a public emergency does indeed affect questions of equality before the law and enfranchisement. We can avoid the barbaric spectacle in Wisconsin, of people risking their own and their neighbors’ lives to exercise their constitutional right to vote. But now we need universal vote-by-mail, as five other states already do.

You can help us make government work better. Tell us where you see waste and abuse by government agencies or contractors. https://www.mass.gov/how-to/report-waste-and-abuse #MAPoli

AG and candidate for Governor @maura_healey is my guest on this week's episode of 'Let's Talk with Smitty.' She has taken on the biggest fights as the people's lawyer and will be a Governor for ALL of us. Visit https://linktr.ee/repsmitty to listen.
#mapoli

Be an informed voter for youth justice! Join the voter education forum in-person or virtually on August 16 from 1:30-3 PM. Learn more and register today: https://lnkd.in/ejEaKtXB #mapoli

I hope every voter in Suffolk Co reads and rereads this comment until they understand the implications of having a DA Arroyo so inexperienced that he is not qualified to sit as SECOND chair on a Suffolk Co murder trial as prosecutor or public defender. #BosPoli #MaPoli #NoArroyos

@orennimni This comment is woefully ignorant & verifiably false. Hayden spent 2x as many years as a defense attorney than Arroyo. Arroyo has so little experience that he does not meet the reqs to lead a jury trial, or even sit 2nd chair on a murder trial, as a public defender or ADA.

This account also loves to criticize @dakevinhayden for enforcing gun laws in communities most grievously impacted by gun violence. Does @ricardonarroyo agree w/ @CourtWatchMA that DA should deemphasize illegal gun possession? Will it be on his expanded #DNPlist? #bospoli #mapoli https://twitter.com/CourtWatchMA/status/1559220406371995648

Voting to tank the #NoCostCalls bill, and now endorsing DA Hayden over @RicardoNArroyo? I think its time for her to go. #mapoli