This was very gratifying to see this morning. Every word of the Globe’s endorsement of Markey seemed like an echo of what I’ve been trying to say here, only more specifically- and elegantly-stated. It is a really good case.

Send Ed Markey back to the Senate

Since Edward J. Markey was first elected to Congress in 1976, he’s often been ahead of the curve in championing progressive causes, whether it’s cracking down on insider trading, ensuring consumer access to wireless spectrum technologies, or helping create a broad movement to put a freeze on nuclear arms.

… What distinguishes Markey’s leadership from many other Democrats, however, is that he’s pushed the country to think bigger about its response to the pandemic, whether it’s a call to fight the disease with a new kind of Manhattan Project, pushing for larger-scale stimulus, or articulating that this political moment is akin to the conditions that made possible FDR’s New Deal. In this moment, the country and the Commonwealth need leaders who won’t settle for incremental progress, who recognize the profound underlying conditions of inequality and racial injustice that exacerbate our problems, and who notice that the table is set for transformational change and can help carry it out with legislative proposals.

As I’ve said since he first ran for Senate, we’re just coming into Ed Markey’s era. He has been cultivating this garden of energy transformation for 40-plus years.

He will connect the post-Watergate era of public-interest politics with the post-Trump/COVID era of renewal.  He’s a guy from a humble background who nonetheless thinks big, who takes policy and law seriously as a means of transforming life for the better. He does his job, maybe better than anyone else in Congress. 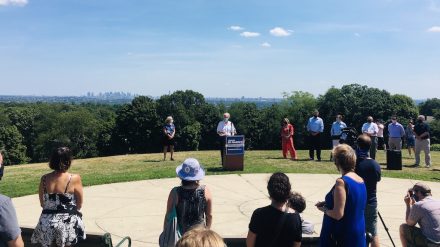 And the work that he’s going to do next year — Lord willing and the creek don’t rise — is going to be the most consequential of any legislator, maybe ever. No, that’s not an exaggeration: The confluence of COVID-19, with its devastation of our health and incomes, our impatience for racial justice, and the ever-worsening crush of climate-fueled disasters will ensure that. And whatever a President Joe Biden and a Democratic Congress can make happen, will happen likely in the first 100 days. Make what you will of the Green New Deal, aspirational or not. But it is the framework for tackling our largest challenges — rebuilding our economy, climate change, racial justice, health, income inequality — not independently from each other, but woven together, harmoniously, “intersectionally”, building power in coalitions instead of siloing and hostage-taking. In yesterday’s baking heat at Robbins Farm Park in Arlington, Markey connected these very dots. We need young warrior-visionaries who are “close to the pain”, like the formidable Alexandria Ocasio-Cortez. But we also need canny, Belichick-like strategic minds like Markey, who know all the moving parts, who can scan the field and game out possibilities. And they both need as much help as they can get: From a President with an unprecedented mandate for change, and a grassroots upheaval the likes of which we’ve never seen.

There is youthful idealism; and then there is a man whose time has come, whose lifelong labor is finally close to fruition. May you gather well, Ed Markey.

(Vote by mail before September 1, everyone.)

(As a side note, I might detect the very welcome influence of the Globe’s new Opinion page editor, Bina Venkataraman — former reporter, MIT big thinker, and Obama administration climate advisor. I’ve got her book The Optimist’s Telescope on order; she talked about it with WBUR’s Meghna Chakrabarti here.)

I liked that the Globe praises Ed without dinging Joe. He has a right to run, he had a right to make his case. He has not made a compelling case in this race, but I hope he runs again down the line. Maybe against Baker or if Warren gets in the cabinet. Ed needs one more term with a Dem president and Dem majority to get something done on climate. Full stop.

Ed Markey was prophetic in 1980 when he laid out his energy vision at the DNC.

Talk about being right on the most existential issue of our lifetime!

The Globe (and JC) has a good deal more class than I do.

Charley on the MTA
Author
Famed Member
Reply to  Trickle up

Friends, here’s the Kennedy campaign dinging Markey for never having visited the towns of Dana, Enfield, and Prescott.

Those towns were flooded in 1938 to create the Quabbin Reservoir. But I’m sure their residents are very disappointed. 🐟 https://t.co/A7O2sb5NNH

jconway
Famed Member
Reply to  Charley on the MTA

“It takes just 20 minutes to drive from Malden to Lynnfield”, maybe in the time of Covid, but in ordinary time only a helicopter can make that run 😆