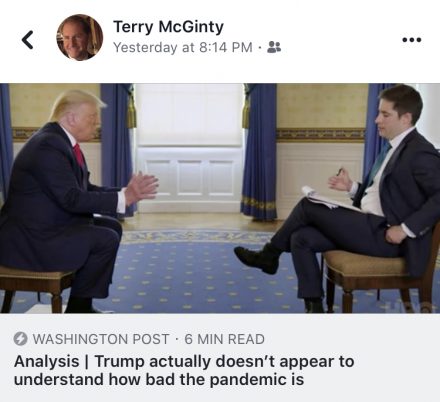 This headline is impossibly naive. He understands how bad it is. He doesn’t care.

All he cares about is shading everything to try to make his alternative reality our accepted reality.

The amazing thing is, most of the country is accepting his frame on this disease, even liberals.

That frame falsely implies that we can control this virus regionally, despite the fact that this has been shown not to work.

So we will proceed, with far too many Democrats passively accepting the madness, and accusing those of us who look to the broader world for best evidence of how to bring this nightmare to heel as being “hysterical”, or some variation of that word.

People who say this – remarkably – have no idea how much they are on the same page with Donald J. Trump.

This would be fine, except that thousands – or perhaps millions – will die needlessly as a direct result of this political and policy passivity.

This pandemic and its historic economic, political and social consequences WILL NOT END until this country resolves to address is as a NATIONAL PUBLIC HEALTH CRISIS requiring a nationwide shutdown.

It most certainly is a national public health crisis. What we’re currently doing certainly will not fix it. Neither will an abrupt nationwide shutdown.

We need to remove this executive branch from power. NOW. Many of these corrupt officials need to be investigated, prosecuted, convicted, and incarcerated (as well as fined).

We need to return competent scientists and administrators to the dashboard and control room of our national response. Some shutdowns in some areas will be needed. Those targeted shutdowns must be driven and informed by facts, science, and objective reality.

If we simply shut everything down today, we will cause the scale of the already catastrophic event to literally explode. That is especially true if these shutdowns happen in the absence of data or logic.

We need to face the reality that this government CANNOT HANDLE this issue. The federal government has collapsed. Shutting down the nationwide economy isn’t going to fix that, it will instead make it worse.

I think we must somehow find a way to invoke the 25th Amendment. I don’t know how that’s accomplished, but it MUST be done.

We are seeing this pandemic expand in the middle of the summer, with no flu, no TB, and while no schools are open.

Even if there is somehow a Blue Wave in November, it will be January of 2021 before the new government even opens for business.

We are looking at a scenario for next fall — October through December — equivalent to category 5 hurricanes hitting EVERY state simultaneously.

We need to be preparing for this RIGHT NOW. Instead, our government is punishing its scientists and restricting the already meager flow of real-time data.

We are looking at a national catastrophe of biblical scale, starting a few short weeks from now.

Last edited 1 month ago by SomervilleTom
0
0

To folks recently comparing Trump to Teddy Roosevelt. TR did not like those who dodged their military duty, hid in bunkers at first sight of danger, and eschewed science.
I doubt he’d appreciate being compared to a man who does all three. Also it’s absurd. Ted Roosevelt V

I’m not sure why you’ve put this as a reply to me (perhaps just an artifact of the comment editor).

The only historical figures I’ve compared Donald Trump to are Adolph Hitler and Benito Mussolini.

I view the continued presence of Donald Trump in the Oval Office as Exhibit A in the case asserting that the American political system has already failed.

There are two problems with the 25th. It has to be invoked by his own VP and Cabinet, who are also his most loyal people. Then if Trump disagrees with their assessment he can appeal to Congress which requires 2/3 of both houses (a higher threshold than for impeachment/removal) to sustain the Cabinet’s action.

I certainly agree that these are problems with the 25th Amendment.

Donald Trump is either mentally impaired, an asset of a hostile government, or both. The fact that he remains in power at this moment shows that our political system has failed.

I can’t think of another democracy that has allowed a leader like Donald Trump to remain in power for this long.