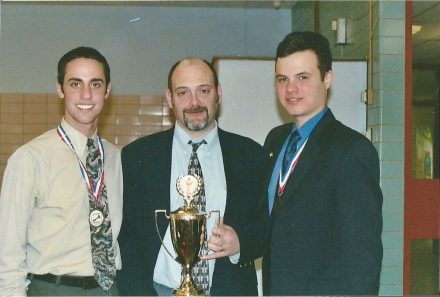 I followed Eric’s post-high school career in the Springfield Republican. He famously joined the Obama campaign, managed the luggage for a dozen people on dozens of airplane flights. (He never lost a bag). He graduated from the campaign to the White House and worked for the President’s advisor David Axelrod and on the Council of Economic Advisors.

I met Eric again at the 2008 Democratic State Convention in Springfield. I saw him in the hallway and introduced myself. (I do this almost compulsively. I don’t expect people to remember me and try to prevent any awkwardness). I had followed Eric’s career in the newspaper just as if he were any other student of mine. He remembered me. We chatted about his time working for the Obama campaign and in the White House.

I was surprised to learn that he was engaged to be married. Millennials aren’t known for marrying in their early 20s. If you’ve met Alison, you know he had found the right girl. But getting married at 23 or 24 said something about the seriousness with which he took marriage and family. Eric was headed to Harvard Law School, but there was more to life than that.

Politicians and people in government have been attending Harvard University since President John Adams did 20 years before the Revolutionary War. And Harvard Law has also been a first step for people in government today, ranging from Ron DeSantis to Barack Obama. Eric could have left Harvard Law and made more money in a couple of years than he has since he became a state senator.

Instead, he came back home.

For all of his success, Eric is truly a hometown guy. He moved back to the town he grew up in. He bought a house near his parents. He wanted his children to grow up in his hometown where his family and friends still live. He may have to overnight in Boston occasionally as lieutenant governor, but his hometown is where his heart is.

The next time I met Eric, he was running for state senate in 2014. I was chair of the Granby Democratic Town Committee. Before we met, I told him I was holding off on endorsing anyone. (That’s sort of the politically professional thing to do when there’s an open seat). It was February or March. We met at the Granby Dunkin’ Donuts. I gave him my endorsement before we left.

The Democratic primary that year was spirited. There were five candidates. Eric brought a level of skill to the race not typical of state senate races. He knew how to organize a ground game. He knew how to raise funds. He went everywhere. I brought him to the Men Who Cook fundraiser in Granby. My parents held a coffee hour for him. (Eric asked Bob Ruel if he had any advice for him. Bob replied, “Buy low, sell high.” Classic Bob Ruel).

One or two of Eric’s opponents had a sense of entitlement that comes with being a big fish in a little pond. They didn’t know what hit them. At least one of them still holds a grudge for losing.

I remember standing in Eric’s first office in East Longmeadow. I was picking up flyers or signs or something. His daughter Rose was toddling around. I don’t remember the theoretical campaign concept Eric and his friend/advisor Michael Clark were discussing. I do remember being impressed that it wasn’t something immediately important to the campaign. As a teacher, I tend to notice people learning. Eric wasn’t just interested in winning, he was interested in learning.

The last time I saw Eric it was the Democratic State Convention in June. I’m not a fan of conventions. I have low tolerance for sitting around and a limited desire to schmooze. But I was there for Eric.

On Friday night, I spent a few hours handling out campaign literature and swag. Whenever Eric was in the area, people mobbed him. I had been witnessing people’s enthusiasm for Eric since he first ran for office. I was accustomed to him greeting enthusiastic supporters, friends, even sheepish Republicans who appreciated his pioneering work on East-West Rail and work in the district.

At the convention, Eric was more than just another state senator. Celebrity is too strong a word. But people wanted to meet him. Shake his hand. Take a selfie. They wanted to tell him that they knew someone who knew him. The connections were more personal, not ideological. They recognized that Eric was not just another politician. He is one of us.

Before the speeches and voting at the convention, I walked a few blocks with the campaign. We headed to an office building where pizza was delivered.

I knew a lot of the people there. Eric’s friend and mentor Candy Glazer, one of the most important Democrats in Massachusetts. Jennifer Metsch, Eric’s head of community outreach. Alison and the girls. (The girls sat with one of his young female staffers who read and entertained them. Too young for the convention, their son was home with Eric’s parents). Eric’s closest friends had flown in from wherever close friends fly in from. They couldn’t vote, but they could be there.

Before we returned to the convention center, Eric stood up and did what he has always done. He thanked everyone. It was an emotional moment. He knew that everyone there had helped him get to where he is. He is extremely talented. Certainly the most accomplished and skilled politician of his generation. But behind the competence is someone who cares about others, who is thankful for what he’s been able to do, and thankful for the people who have helped him do it.

“NOT A FAN” | Gov. Healey is “not a fan” of legislation to legalize teacher strikes, tells @kelleratlarge that keeping kids in school is “paramount.” #mapoli #woburn

Thank you @BostonGlobe for reporting on the missing. What does it take for missing person cases to be adequately reported and investigated? https://www.bostonglobe.com/2023/02/04/metro/how-missing-become-uncounted-inside-governments-flawed-approach-finding-missing-persons/ #mapoli #MAMissing #HaveYouSeenAndy

ME has one of the densest lithium deposits. ME can reap economic benefits & MA consumers could know their lithium was extracted under high enviro & ethical conditions. ME lawmakers need to get on board soon & MA leaders need to push them. https://commonwealthmagazine.org/opinion/is-mining-lithium-in-maine-a-cost-of-going-electric/ #mapoli #mepoli

Thank @MassGovernor @massdems for your extreme energy bills next month for trying to keep warm this month. #mapoli