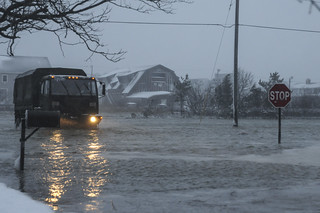 It’s not your imagination: Giant snowstorms really are hitting Massachusetts more often than they used to.

Here’s an example: The 1993 “Storm of the Century” delivered 20.1″ of snow to Worcester. Incredibly, that storm no longer even makes Worcester’s top 10 – Worcester has gotten 7 snowfalls of 20.8″ or greater in just the last 22 years.

Climate change obviously makes storms like this worse by raising sea levels. Not only are sea walls that were built 50 years ago old & crumbling, they were built for an ocean that was about half a foot lower.

The number 1 cause of this is that it is winter. In winter it is cold over the continent. But it is warm over the oceans and the contrast between the cold continent and the warm Gulf Stream and surrounding waters is increasing. At present sea surface temperatures are more the 2F above normal over huge expanses (1000 miles) off the east coast and water vapor in the atmosphere is about 10% higher as a result. About half of this can be attributed to climate change.

We can see clear evidence of a trend by looking at the top 5 snowfalls of three big local cities.

Let’s expand Boston to 6 just so you can see where the latest storm ranks. Of Boston’s 6 largest snowfalls, 4 have come since 1997:

All 4 of Worcester’s 4 largest snowfalls have come since 1992:

Three of Providence’s 5 largest snowfalls have come since 1996:

As you can see from the below graphic, the trend holds over the top 10 as well. Meanwhile, all of Hartford’s top 3 snowfalls have come since 2006 (note Worcester’s snowfall total rose since this graphic was created):

When we talk about building new polluting infrastructure like fracked gas pipelines or the Keystone XL tar sands pipeline, we’re talking about committing to making this trend worse for decades to come. Isn’t it worth paying a little bit more for wind and solar now to protect this and future generations from worsening extreme weather and all the other impacts of climate change?

Curiously, 2014 was the hottest year on record, but the northeastern part of the U.S. had a year that was colder than average.

A Rhode Island-sized piece of ice just broke of Antarctica. The video of the breach in a 500-foot thick Brunt Ice Shelf is absolutely staggering

Just a reminder that Massachusetts is going to unlimited capacity indoor dining starting tomorrow while the CDC begs us not to, and it’s super embarrassing that no one can articulate a justification why other than 🤷🏻‍♂️ 🤷🏻‍♂️ 🤷🏻‍♂️