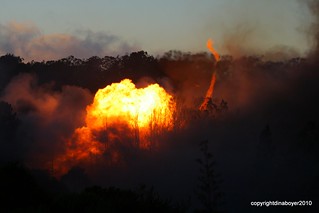 We don’t call it “natural oil” or “natural coal.” So why do we refer to methane gas – especially the gas that’s been fracked – as “natural”?

Fracking is the process of drilling down into the earth before a high-pressure water mixture is directed at the rock to release the gas inside. Water, sand and chemicals are injected into the rock at high pressure which allows the gas to flow out to the head of the well. […]

The extensive use of fracking in the US, where it has revolutionised the energy industry, has prompted environmental concerns.

The first is that fracking uses huge amounts of water that must be transported to the fracking site, at significant environmental cost. The second is the worry that potentially carcinogenic chemicals used may escape and contaminate groundwater around the fracking site.

If all that isn’t enough, fracked gas also destabilizes our climate and causes earthquakes. Fracking now produces half of the oil and a majority of the gas produced in the United States.

This isn’t a semantic debate – it has a real impact in moving public opinion. Ask voters if they want more natural gas and most say yes. Ask if they support fracking and a plurality oppose it.

Lowell public buses proclaim that they run on clean natural gas. Would it be accurate to say that gas does in fact burn cleaner than oil, but the process for extracting it is worse? If you had to choose between oil and natural gas, which on balance has the least negative environmental impact, accounting for both production and consumption?

I defer to BMG participants more qualified than me — stomv comes to mind.

My perception is that natural gas emits fewer particulates when burned in an internal-combustion engine than diesel oil. I also think that the technology to scrub the particulate emissions of diesel oil is reasonably effective and reasonably mature.

I think there is no one answer about “environment impact”. Methane (natural gas) inescapably releases CO2 when burned. I don’t have a handle on the precise chemistry, but I think the CO2 emissions of methane versus oil for a given BTU content are comparable.

Methane is itself an extremely potent greenhouse gas, and more methane being moved around means more un-burned methane leaking into the atmosphere.

I think pretty much all fossil fuel is destructive to the environment during production.

My bottom line is that the claim that natural gas is “cleaner” is dated, and significantly understates the CO2 footprint of those “clean” buses.

The short version is that fracked gas creates fewer local pollutants like sulfur, mercury, particulates, and smog-forming nitrogen oxide. But it’s just as bad for our climate, so why would we invest in fracked gas fuel infrastructure that will leave us locked in to fossil fuels for decades when we could go straight to electric buses that can run off totally clean solar & wind power?