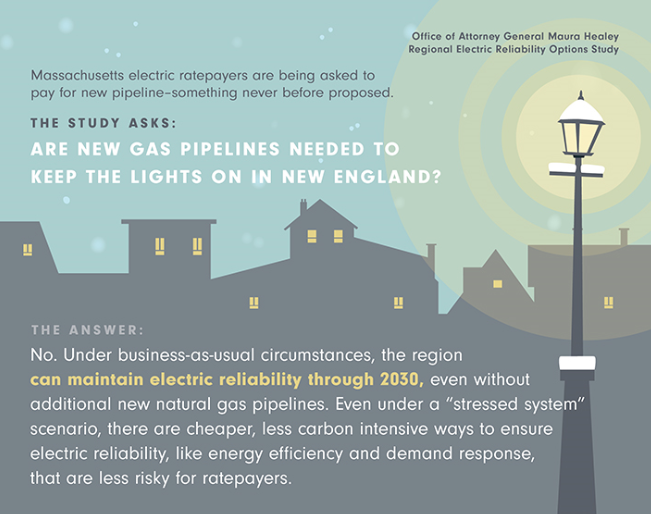 With the Massachusetts legislature preparing to take up comprehensive energy legislation, Wall Street-controlled energy companies are pushing hard to include a pipeline tax, allowing them to charge all ratepayers a fee to build new & expanded fracked gas pipelines. Here are 11 reasons why that’s a bad idea:

Because here’s the unhappy fact about methane: Though it produces only half as much carbon as coal when you burn it, if you don’t — if it escapes into the air before it can be captured in a pipeline, or anywhere else along its route to a power plant or your stove — then it traps heat in the atmosphere much more efficiently than CO2. Howarth and Ingraffea began producing a series of papers claiming that if even a small percentage of the methane leaked — maybe as little as 3 percent — then fracked gas would do more climate damage than coal. And their preliminary data showed that leak rates could be at least that high: that somewhere between 3.6 and 7.9 percent of methane gas from shale-drilling operations actually escapes into the atmosphere. […]

If you combine Howarth’s estimates of leakage rates and the new standard values for the heat-trapping potential of methane, then the picture of America’s total greenhouse-gas emissions over the last 15 years looks very different: Instead of peaking in 2007 and then trending downward, as the EPA has maintained, our combined emissions of methane and carbon dioxide have gone steadily and sharply up during the Obama years, Howarth says. We closed coal plants and opened methane leaks, and the result is that things have gotten worse.

I’m sure there are many more and you’re welcome to add what I missed in the comments.

Look, I understand why including nothing for natural gas in this energy bill is hard to swallow for legislators. It’s counter to the usual horse-trading process where lobbyists for one side asks for a loaf, the other side asks legislators to give nothing, they settle at half a loaf, and everyone goes to 21st Amendment for drinks after.

Giving polluters some of what they want also appeals to legislators who prefer to avoid lines in the sand. Can’t we approve just this one more dirty energy project?

But when it comes to confronting global warming, we’re literally decades past the bargaining point. James Hansen warned Congress that our climate was already changing in 1988 – 28 years ago. Temperatures are rising even faster than predicted and as today’s Providence Journal editorializes, sea level rise forecasts are getting scarier.

“Cutting greenhouse-gas emissions by burning natural gas is like dieting by eating reduced-fat cookies,” says the University of California-Irvine’s Steven Davis. “If you really want to lose weight, you probably need to avoid cookies altogether.”

Any new gas infrastructure should be designed with renewable methane in mind. Methane, natural gas, is not a bridge fuel. It will always be with us because we and our animals and the breakdown of our organic garbage all produce it. We should be thinking about how to capture and use those natural sources and use them rather than just letting them go into the atmosphere to become an extremely potent greenhouse gas.

If we are building new gas infrastructure without planning for local sources of renewable methane, we are being criminally stupid.

It’s easy to make Baker into a boogeyman, but plenty of Democrats from Garrett Bradley to Ted Speliotis have backed the pipeline and taken its money. Opposition to the pipeline is actually quite intense in communities where’s it proposed, including many that are center-right leaning politically.

Ted has a Democratic primary challenger in anti-pipeline activist Bob Croce (full disclosure: we had a friendly get together over coffee but this isn’t an endorsement from me or my organization) and my party is trying to field a challenger to Bradley whom I look forward to introducing to you all when she confirms her campaign. Phone calls matter even more, so let them know you don’t want this.

Speliotis and Bradley have become Kinder Morgan’s favorite legislators. The Rep from Danvers has taken the max donation of $1,200 the past two years from KM lobbyist Brian Hickey and two associates. Here’s an article in the Salem News: bit.ly/1RMiY5C

I started out as an anti-pipeline activist, and the only reason I decided to run against the Rep from Danvers was because of his total lack of support for our pipeline opposition.

If you sign these online petitions, you are giving your email to activists with your name. You will not only get unending emails and fundraising requests from them, and such lists are often shared with ‘similar’ causes. If you agree, by all means send a letter or email, but don’t give them away in this fashion.

This has been a public service announcement

I guess they going rate is 180k, and my guess is most folks would unsubscribe or put they email in their spam folder. Its a way to make some consultant free money, that’s for sure.

Getting your email address on multiplying lists is what they invented spam filters for.

You know who annoyed me the most for selling my email? Scott Adams. After I subscribed to his Dilbert list, I suddenly got tons of spam. When I changed my address, (and refrained from signing up again for Dilbert), it all stopped. Screw him.

Went on a tirade this year denigrating women and minorities, not fun. Career suicide for a cartoonist but political dynamite for a Presidential campaign.

Getting mail from the Communist Workers Party and other similarly enticing groups, all thanks to a week in college “working” for MassPIRG before I realized it was an exploitative scam.

12. The legality of the Dept. of Public Utilities sanctioning the cost of pipeline infrastructure being passed on to Ratepayers is being questioned by the AG – the case will be heard on May 5th in the Supreme Judicial Court.