Update: Commissioner Suuberg has approved the permit. This fight will go on, in court.

This thing has gone statewide, folks: 29 State Senators signed a letter to Mass. Department of Environmental Protection Commissioner Martin Suuberg, asking him to reject and rescind permits for the Weymouth gas compressor station.

In their letter, they hit all the key points:

Thanks to these Senators, including my own, Cindy Friedman, for taking notice. This is indeed a statewide issue, as the indefatigable Andrea Honoré has posted here. The whole letter is below the fold, or you can read it at FRRACS: 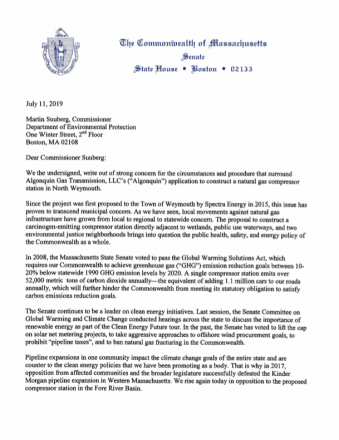 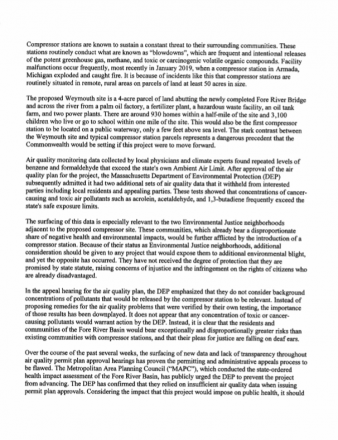 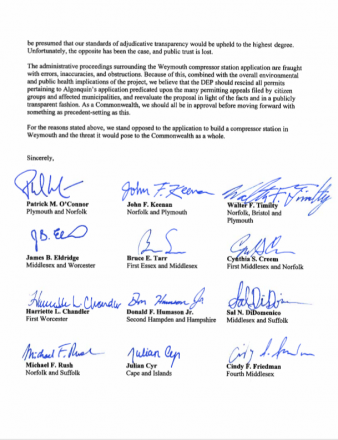 They should tie this to Bakers neck every step of the way. Instead of wringing their hands at Teflon Charlie the Democrats should be proactive at driving his approval ratings down. They can do this by simply letting the state know he is approving this polluters in Weymouth’s backyard-yours will be nexts. The ads write themselves. Maybe Tom Steyer can fund that since our gutless state party never will.

George Floyd's murder and the police response have resurfaced feelings of pain, anger, and numbness in many Americans. I am grateful to have gotten the opportunity give a voice to some of that pain. #bospoli #mapoli

Last night, President Trump threatened to shoot protesters in Minneapolis—a horrendous and racist threat. I condemn this president and stand with activists demanding an end to the systemic racism that has abused, incarcerated, and killed thousands of Black and Brown people.

“Limiting debt relief for defrauded student loan borrowers” is one way to put “maximizing profits for criminals.” The Trump administration should be ashamed that it is once again siding with sham colleges instead of victims of fraud.
https://www.washingtonpost.com/education/2020/05/29/trump-stands-with-devos-vetoes-bill-overturn-her-controversial-student-loan-forgiveness-rule/

There have been a lot of arguments about "the right way to protest" over the years. I hope any conversations about this have lead us to understand that ALL protests exist for a reason, and that protests are needed whether the form of the protest fits your sensibilities or not.
1/

As a young reporter in South Florida, when I covered protests against racist police actions, I never feared the protesters. I feared the police. https://twitter.com/guthriegf/status/1266552085870493697